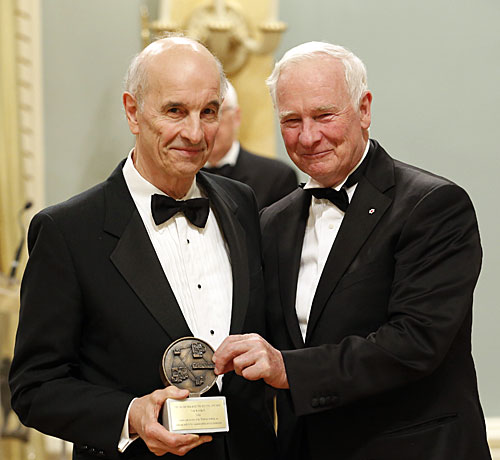 Tim Kotcheff accepts the Michener-Baxter Special Award from His Excellency David Johnston, Governor General of Canada. The photo was taken during the Michener Award ceremony held at Rideau Hall, June 11, 2014.

A 30-Year veteran of public and private network television, Tim Kotcheff is unique in having held the senior news and current affairs portfolios at both Canada’s national television networks.

As a career journalist, he has worked as a writer, reporter, and producer. He managed both news and current affairs programs, specializing in the handling of live network Federal elections, election debates, leadership conventions and many other network news specials at both CBC and CTV. He produced such programs as The Way it Is, The Day it Is, Newsmagazine, Saturday Report, and the CTV National News.

He was responsible for creating state-of-the art studio newsrooms at both networks, and opened news bureaus in Moscow, Beijing, Mexico City, New Delhi and Hong Kong.

During his tenure with CTV, he was responsible for all special events coverage, including Expo ’86, the World Economic Summit in Tokyo (May 1986), the Mulroney-Reagan Summit in Washington (March 1986) as well as Canadian tours by Her Majesty Queen Elizabeth II and Pope John Paul II, and a number of political leadership conventions.

Recognized throughout the industry as a strategic thinker and innovator, he championed such projects as headline news channels at both networks and CBC Newsworld International. He has worked extensively with such international services as CNN, ABC, BBC, CBS, and ITV on both news and internet projects.

Mr. Kotcheff joined MediaLinx, a Bell Canada multimedia Internet content company in 1994 to develop a prototype for a broadband multimedia interactive Canadian news and information service for the consumer market. As Director of News at MediaLinx, he constructed and managed NewsExpress, which at that time, was considered Canada’s premiere Internet news web site and a precursor to Sympatico.ca.

As a MediaLinx representative, he was involved with a number of Internet related projects including working with the CBC to develop the joint venture Nagano Olympics Website and with CTV to develop the network’s on line video digital news service.

Mr. Kotcheff was born in Toronto. He is an ardent Arctic canoeist and has canoed 25 Arctic and sub-Arctic rivers.

He has served on the Michener Awards board since 1989 and was appointed to the Executive Committee of the Board in 2002.

The Michener Special Award was created to honour an individual whose lifetime work exemplifies the best in public service journalism. It is presented only occasionally and at the discretion of the Foundation.