You are here: Home1 / Isortoq2 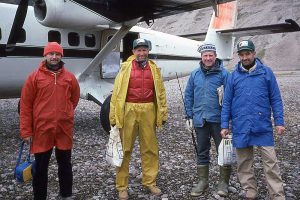 As our plane circled the landing site, vivid memories of last year’s disaster on this forbidding river began flooding back to me.

The unfortunate loss of a canoe with much of our gear and most of our cooking supplies had forced our 6-man team to abort a well planned and expensive expedition. If the truth be told, we were never comfortable canoeing the Isortoq.

I don’t know what compelled us but, a year later, we resolved to challenge this river once again. But now there were only four of us. Two members from the previous ill-fated trip – Peter Stollery and myself – plus John Godfrey and a new recruit, neophyte paddler Joe Egerszegi. As the twin otter touched down fears of yet another life-threatening debacle clouded my mind.

We made a hard landing on a long rock-strewn sandbar at the confluence of the Isortoq and Freshney Rivers – exactly the same spot at which we ended our trip the previous year. We unloaded quickly and watched the Otter take off and disappear over the horizon.

And suddenly, we were all alone in the middle of nowhere. Our mission – finish the job. Was this foolishness? Suicidal? 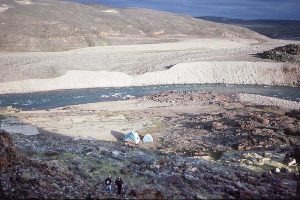 We seemed, perhaps and understandably, to be in no rush to get started. As we dithered about, I could feel my confidence ebbing away. By the third day John Godfrey took command and insisted we needed to get going. John and Peter paddled together, with Joe and me in the other canoe – my first time as sternsman – first time for Joe as a bowman.

Pushing off, we faced a long run into the stark face of a canyon wall that forced the river hard to the left. What lay beyond we could only imagine. As the current grabbed our canoes we stayed close to the rocky shore and at the mid point of the run pulled over to a sandbar for a breather. Peter looked down into the water and caught a glint from an object buried deep in the sand. It turned out to be a wine bottle. 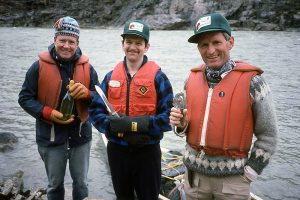 Chardonnay, in fact, and intact. “My God,” he said “they certainly drink well up here.” Remarkably, the bottle of wine had survived the 30 below zero winter temperatures. Digging around, there was more to be found – cooking gear, plates, cups, assorted cutlery, pots and pans. It was a poignant moment for it was part of the gear and personal belongings Craig and I lost when the lining ropes slipped through our hands and the canoe disappeared down the rapids the year before. It must have capsized and spilled its contents near this sandbar. (Incidentally, I carried the wine back to Toronto for our next reunion where each member of the canoe group had a sip).

There were no major surprises as we continued through that canyon; standing waves yes…but all within our capabilities. My shouting instructions at Joe unnerved him a bit, but swamping fully loaded in frigid waters wasn’t an acceptable option. Joe, however, did remarkably well.

We decided to beach early and found a campsite just below a high rocky hill strewn liberally with wolf scat. It was an incredible sight – an obvious gathering point for a major wolf pack. None could be seen from our camp, but we felt we were being scrutinized by the head honcho from a safe distance. The night was interrupted by intermittent howling. Clearly, we were not alone.

The next few days were uneventful except for one instance when we suddenly encountered a tricky set of rapids. Our bearing was a little off and we sideswiped a huge rock lodged in the middle of this turbulent section of the river, but not hard enough to cause a serious mishap. Joe and I both breathed a sigh of relief when we finally found calm waters. By now though, we were both comfortable paddling together. 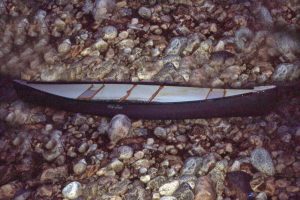 From our first moments on the river, I kept an eye out for my indestructible waterproof pelican case from the year before hoping it would show up somewhere along the route. It contained my precious photos and camera. But there was no sign of it.

However, on day 6, rounding a bend in the river, we were astonished to see a canoe beached forlornly on a rocky gravel bar. Indeed it was our lost canoe, but empty of all food and equipment. We pulled over to take a closer look and found it to be in remarkably good shape and quite canoeable. We considered trying to bring it home but thought better of it. It would be an albatross for the rest of the trip. Instead, it would stay in its resting place as a memorial to a wilderness misadventure.

Before we had set out from Hall Beach, we agreed with our pilot on a desirable pick up point where we intended to terminate our trip after eleven days on the Isortoq. The otter required about 300 metres for landing and takeoff. We found what we hoped would be a suitable strip, more or less at that predetermined point, but it was surrounded on three sides by high canyon walls. The plane was scheduled to pick us up the following day. 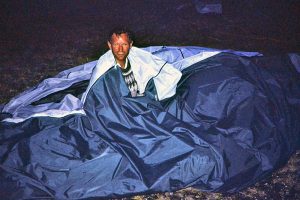 That night our campsite was blasted by high winds which flattened Peter and John’s tent. They woke up when the roof hit them in the face but decided they could live with it collapsed around them until daybreak.

In the late morning we sipped coffee, packed up and cooled our heels waiting for the ride back to civilization. An hour or so later, the otter swooped in for another brutal landing. We loaded the canoes and gear and hopped aboard.

The takeoff was hair-raising. The otter roared down the gravel sandbar and headed directly towards a rock face. At the last moment the pilot banked sharply, missing the cliff by about twenty metres, and then soared up and out of the canyon. It was to be our last thrill on the brooding Isortoq River.

From the beginning, I was struck by the profound isolation of this bleak, desolate but strangely beautiful waterway. Never did we find any sign of human existence, which gave rise to speculation that we may have been the first to glimpse its hidden secrets, the first to sweep through its imposing canyons. Our two-year tussle with the treacherous Isortoq was finally over. We had prevailed.

PS We flew from Hall Beach to the Freshney on July 29th and were picked up at the end of the Isortoq on August 8th.

On being Shanghaied into the Isortoq II Expedition
By Joe Z. Egerszegi

On being Shanghaied into the Isortoq II Expedition. By Joe Egerszegi

"When asked what I thought of the Isortoq, I likened it to first learning to drive by getting dumped into the Indiannapolis 500". MORE.....

On Recruiting Joe Egerszegi for the Isortoq II Adventure. By Peter Stollery

"Have you ever been on a canoe trip”, I asked my neighbour and good friend Joe Egerszegi? “Yes. In Algonquin Park. With the Boy Scouts. It was great”. “Well”, I said. “You’re just the man we’re looking for”. MORE..... 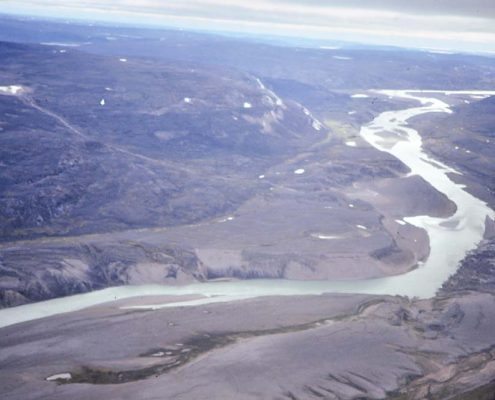 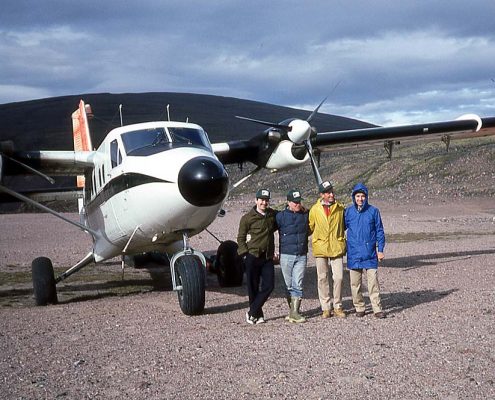 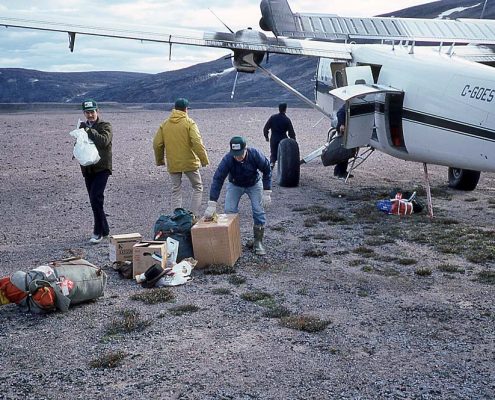 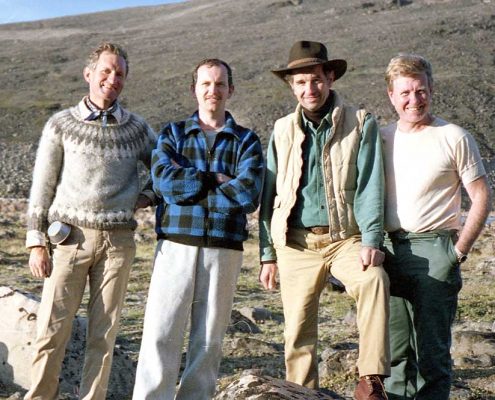 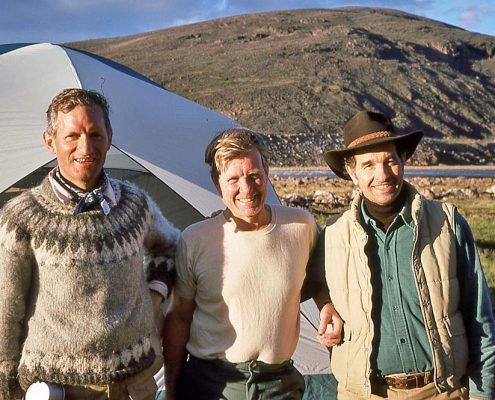 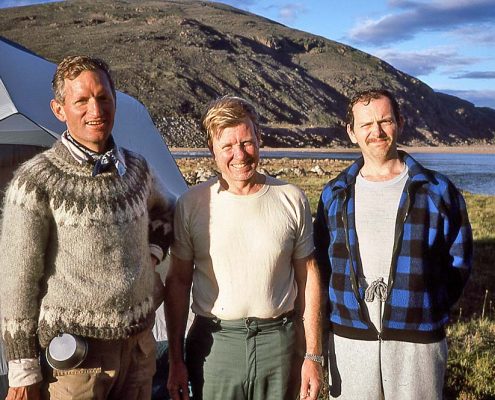 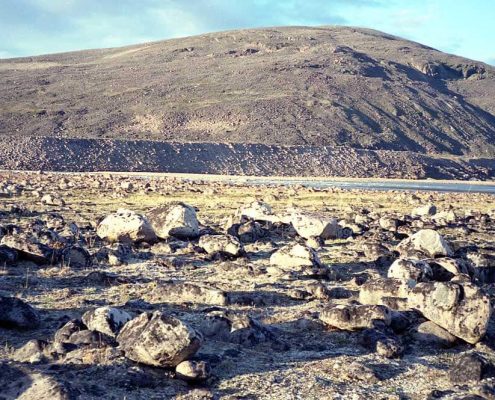 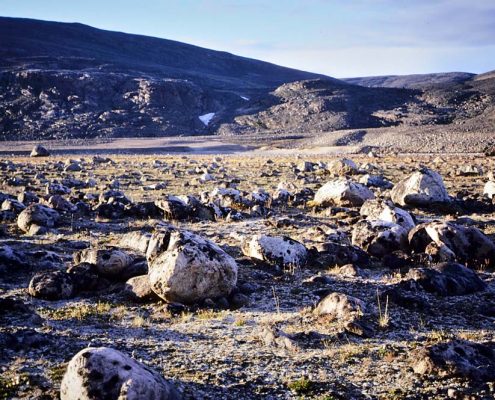 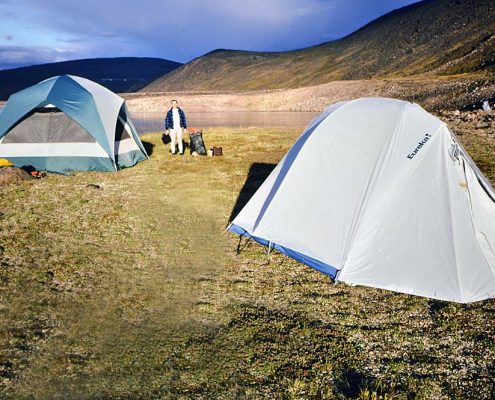 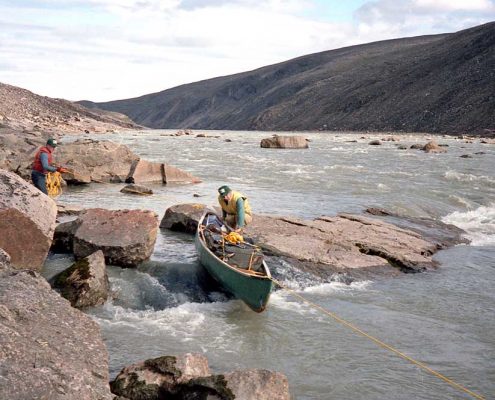 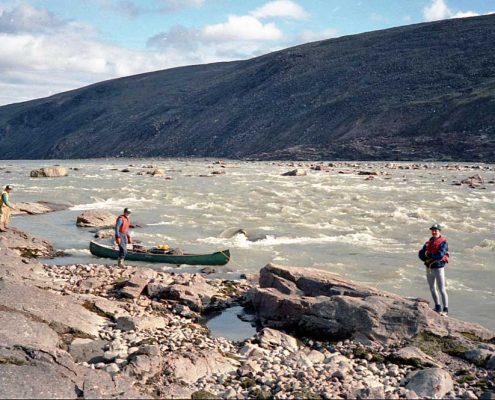 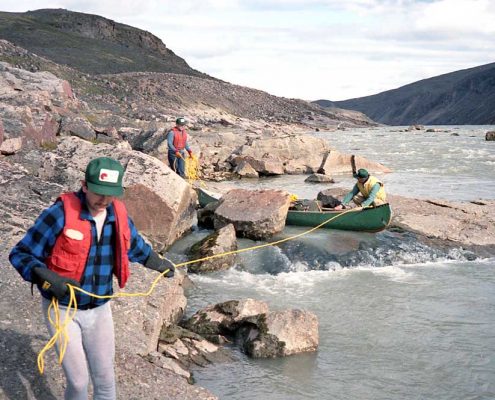 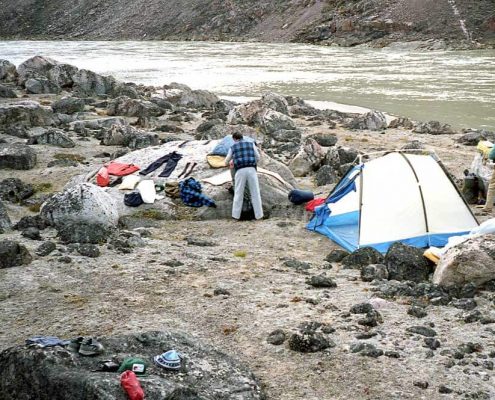 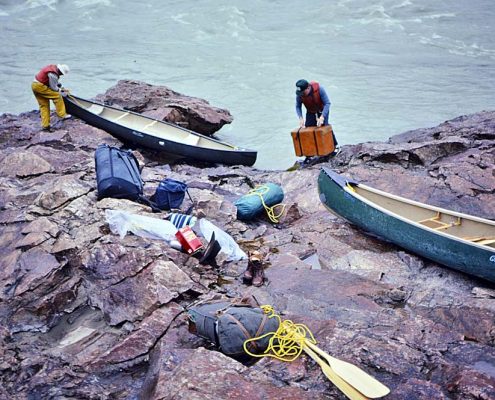 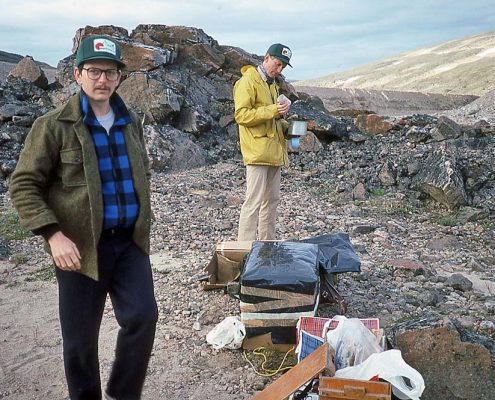 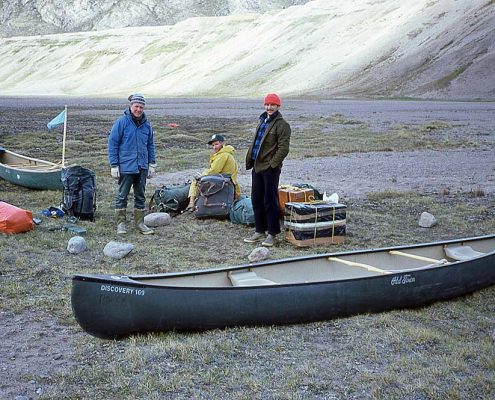 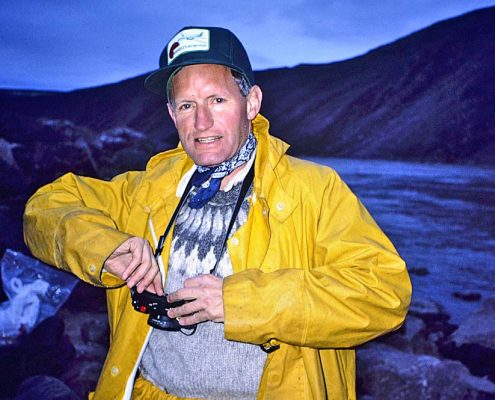 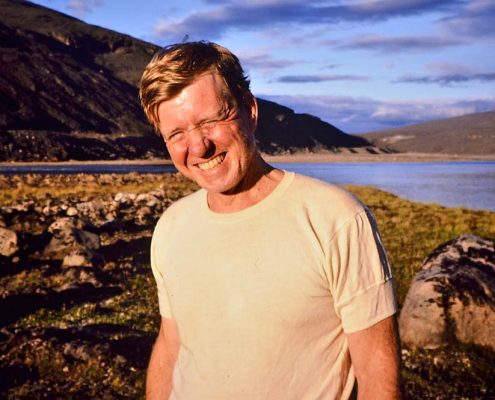 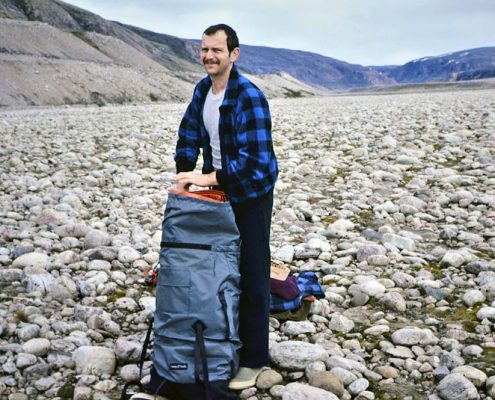 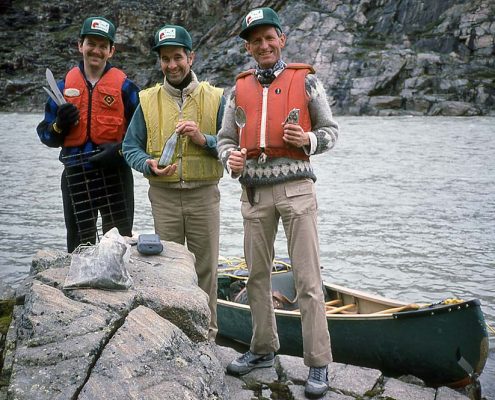 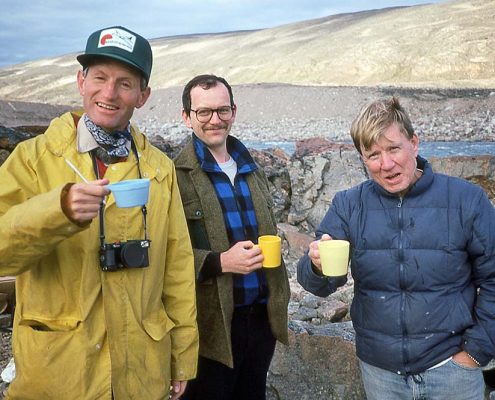