You are here: Home1 / Learning whitewater 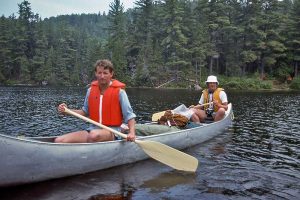 It all began badly in the Ottawa Press Club at midnight one Saturday night in March 1978. It was the week-end of an annual Federal Liberal Convention in Ottawa. I was there as a delegate from Nova Scotia. I found myself at the bar talking, well, boasting, really, with a man with thick glasses called Something Oliver. Drink may have been involved. He told me he ran. I told him I ran races against my university students and beat them. He told me he rode horses. I told him I had played polo. He told me he did white water canoeing. I told him I was sure I could do white water canoeing with a little practise. He asked me if I wanted to come on a canoe trip to Alaska. I proposed we leave next morning at dawn, and never mind that the place would still be frozen solid.

From these braggardly beginnings, we somehow managed to exchange phone numbers before we closed the place down. Perhaps fearing that he had been over enthusiastic with his invitation to canoe the Noatak that summer, Craig invited me to learn canoeing on the Petawawa. I was paired with a university student called Steve Blair who worked for the Ottawa outfitter Trailhead, and from him I learned to respond to commands such as: Backpaddle, Draw Left, no – the OTHER left! and all the other fine arts of white water canoeing. And so it began. 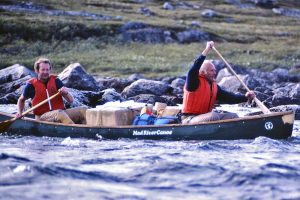 As I was preparing to leave the American Embassy in Ottawa in the summer of 1980, after four productive and pleasant years, I received an unusual invitation. Would I like to go on a whitewater canoeing trip on the Hood river, above the Arctic Circle? What better way to say goodbye to a group of close Canadian friends.

This group was quite well known in Canada, in several respects. The leader was a TV anchor, Craig Oliver, and the others included a TV executive, a senator, a college president, an arts administrator, a professional skier and outfitter, and the Prime Minister’s executive assistant. Seven in all.

My friend Craig thought I’d be a useful eighth, but there was one technicality. Could I paddle a canoe to their standards? In truth, I had not been in a canoe since summer camp in 1942 at Manitowish in the lakes and forests of northern Wisconsin, but I was certainly eager to try. So I was taken on an overnight dry run on the Petawawa, which had whitewater rapids including some that only the foolhardy would attempt. Happily, I passed the test.

From Novice Canoeist to Draught Horse by Bill Fox 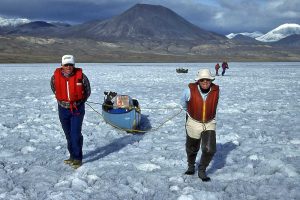 I was a novice canoeist and had spent the early summer dutifully practicing my J-stroke on the dock at the cottage. I was reassured when told I would be in a canoe with Ted Johnson, whose many skills include the ability to read a river as if driving a freeway with overhead signs. My job, as the person in the bow, was dead simple – power on demand. In theory I was to shout warnings to Ted if rapids or rocks seemed threatening, but I quickly decided that was a call best left to the master in the stern. Had I known what was waiting for us on arrival, I would have supplemented my dry land training with more roadwork. I had been invited to paddle. I ended up a draught horse on the Ruggles River. 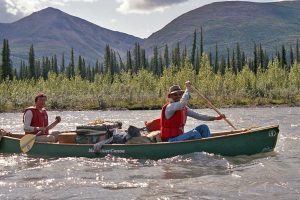 So, the organizers, in their infinite wisdom, had assigned the two most inexperienced paddlers to the same canoe; one of the four on the 1984 trip on the Bonnet Plume. Eddie Goldenberg was, I was assured, an accomplished whitewater canoeist, despite the fact that he was as new to this venerable company as was I, but, then, I made no pretense of any skills beyond flat water tripping. Eddie was ordered into the stern.

After an idyllic couple of days on the shores of Bonnet Plume Lake in the northern Yukon, I was given an hour of whitewater instruction in the creek which would become the Bonnet Plume River. There were few challenges in the initial hours on the river but then, paddling as tail-end-Charlies, Eddie and I meekly followed the other three canoes to shore in the face of loud and significantly disturbed water ahead.

We all scrambled up a high bluff overlooking a vast mass of roiling confusion, and the experts began to ponder; lots of chin stroking and teeth sucking as we contemplated what looked to me like the run up to the edge of Niagara Falls. “We’ll line along this shore,” agreed Tim and Craig, “to that boulder, then ferry towards the centre, then slip into the eddy behind that massive rock, pivot and ferry backwards in front of those haystacks, pivot around again, and then, carefully back-paddling, thread our way between that great hole and those treacherous rocks just below the surface, and, avoiding at all costs that keeper below the ledge, make our way to the left, and pull out by that granite shore over there, but on no account go beyond that point or you’ll be over the falls.” 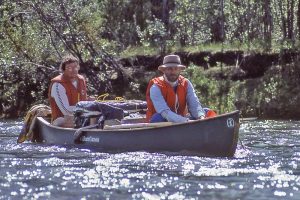 Johnson Fowler canoe on the Wind

Having only the vaguest idea of what they were talking about, I was but a little terrified, but, hey, with everybody talking in those measured, seemingly confident, Chuck Yeager-like tones, what could go wrong? They did, though, look a little strangely in my direction, or was it in Eddie’s? As we were the neophytes, we would launch third, so that we could watch the first two show us how it ought to be done, and before the last which, ominously, would act as “pick-up.”

I knelt purposefully, even proudly, in the bow, anxious to prove that I had absorbed that hour of training in the creek. I could paddle in both directions, draw right, draw left, and pry right (even if I was not very comfortable with my left pry). So, pumped and poised to go, I turned back to remind Eddie to issue the appropriate orders, but what I beheld was the face of experience. Unlike me, he knew enough to be scared shitless. “Just paddle like hell,” he croaked, and we were off.

We didn’t pivot. We didn’t ferry, and we didn’t back-paddle. We hit most of those rocks, missed the sanctuary of the eddy, and proceeded straight through those massive haystacks. I never saw the hole, the ledge or the keeper (and wouldn’t have recognized them if I had). Two-thirds of the way to the pullout we were full of water, about 3 inches short of the gunwales. By this time I understood that the only order I was going to get was full-ahead, and already I could see the looks of abject horror on the faces of the four who waited on the far shore.

We slammed arrow-straight into the sheer granite shore. Leaning out far over the bow, I clawed at the almost smooth surface for any kind of purchase. Tim Kotcheff fell across me to anchor us from being swept down-river and over the falls, which act of salvation broke a couple of my right ribs.

I had learned whitewater canoeing. 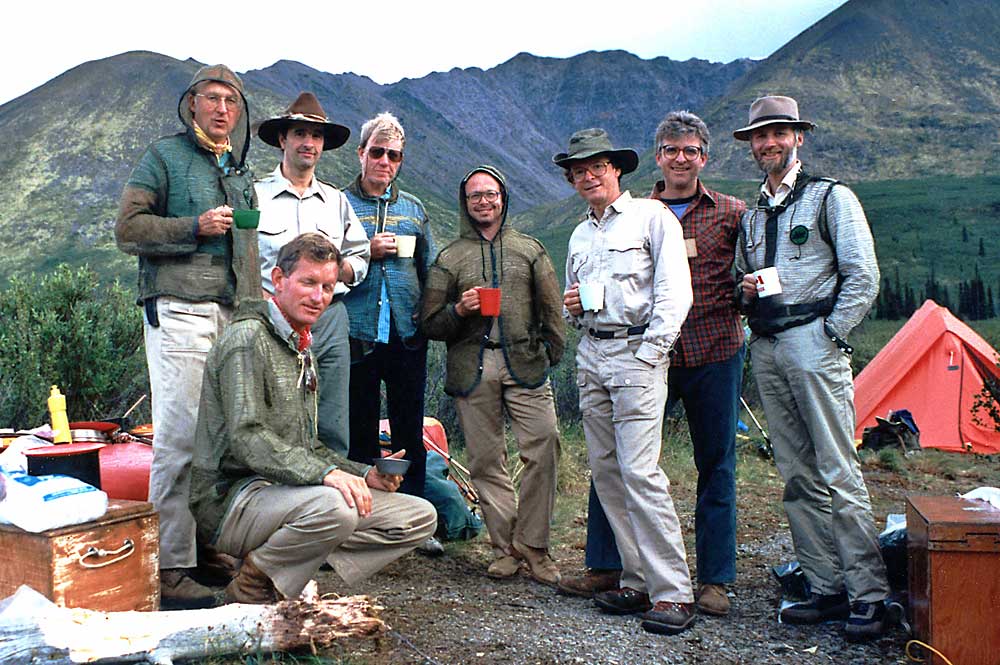