Life and Death on the Bonnet Plume by Bob Fowler

My fractured ribs offered me regular reminders of the perils of white water, and while no reshuffling of canoe assignments to better distribute our store of river ignorance seemed to be contemplated, we proceeded down river. At one point, after lining a difficult patch, we again clambered up a bluff to observe the wide river making three great lazy loops before us. No white water, lots of room, just three long “sweepers” having fallen into the river near the centre of each of those loops, reaching less than a third of the way across the heavy, fast-moving stream.

Almost as an afterthought, Craig, looking intently at Eddie, said – evidently disgusted at offering such obvious counsel – “Just steer wide around those sweepers, and you’ll be fine.”

I had been duly warned about sweepers. If you went into the river near them the current would hold you against the underwater branches and you would drown. 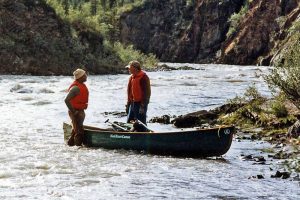 Eddie strained us through every one of them. I was raked by branches, losing hat and sunglasses, but mercifully we remained upright after being sifted through all three.

As we approached the pullout just past the third sweeper, Craig strode fully clothed into the river. His right hand on the butt of his holstered .357 Magnum. Grabbing Eddie’s right shoulder with his left hand he snarled, “You kill one of my boys, and I’ll blow your head off.”

Thank You, Barzini by Bob Fowler 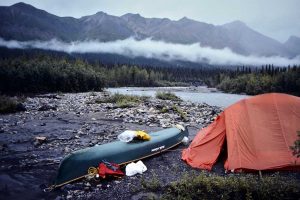 A rainy and miserable camp

During the Great Disastrophy in the rock-slide canyon on our first day on the river, among the many valuable things lost were a couple of two-fours of Molson’s Canadian. Bits and pieces of kit were recovered along the river over the next few days as we continued our progress northward toward the junction with the Peel, but after many days without beer we regretted its loss acutely, particularly around lunch and Happy Hour. While the daiquiris were ever welcome, more and more vengeful looks and mutterings were directed toward the occupants of the Lazarus canoe: Stollery and Godfrey.

A week later, at a rather miserable campsite, after a spate of wet and windy weather, we were all huddled around a poor and smoky fire, when suddenly, and without any warning, Stollery spun away from the group and strode straight into the swiftly flowing river about 5 paces from where we were standing. Staring down intently, up to his thighs in freezing water, his right hand swooped into the stream and emerged clutching a can of beer, which only he had seen bobbing by. With a curt, “Thank you, Barzini”, he popped the can, sucked off the foam, and returned to the group by the fire without further word or explanation. 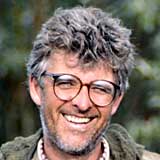 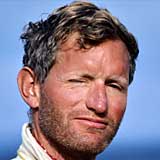 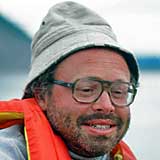 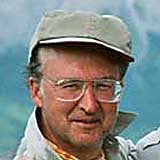 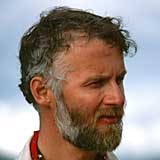 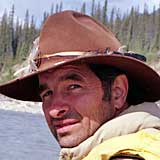 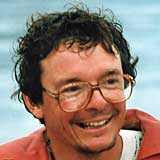 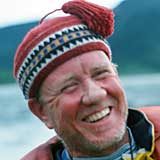