You are here: Home1 / Fireplaces

Fires and Fireplaces by David Silcox 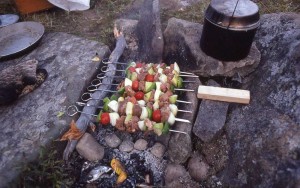 Fireplaces are crucial elements of any campsite and of any outdoor kitchen. They are centres of social intercourse, focal points of a group, the place around which meals are taken and conversations held. They are important. And that is why building a good fireplace in the right place is one of the first and most important decisions about a campsite.

Over the years we’ve had all kinds of fireplaces. Some of them are memorable, such as the one Gow built into the bank on the Burnside River, with large stones which gave warming spots for pots, a solid base for the grill, a fuel box, and eight, large, flat stones in a semi-circle to sit on while we ate facing the fire. You couldn’t have had better. There were others. At Helen Falls on the Hanbury in a nook on a high rock, overlooking a canyon on the Hood; and a boulder formation on the Noatak come to mind. 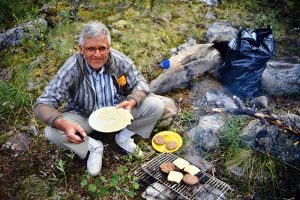 Once, on the Hood River, when we were about to tackle the traditional dinner of Kotcheffburgers, we lit the fire on a lick of sand that became spongy and springy, the way you think quicksand might be. The fire was being difficult too, giving off little or no heat. We couldn’t figure out what was wrong. Gow finally insisted, to our total incredulity, that the fire had to be moved. He was so insistent that we decided to humour him, even though it meant losing quite a bit of time. In fact he was right to an annoying degree. The fire perked up instantly and we were able to finish the cooking quickly. The ground we had started on had been stealing all the heat and absorbing it into the permafrost. Had we not moved the fire, we might be there yet or have had steak tartare instead of hamburgers. 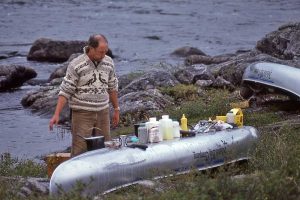 There’s very little room for serious error in the Arctic. It’s easy to disappear in the On the Thelon River across from the site at which John Hornby and his two friends Edgar Christian and Harold Adlard starved to death in 1927, Oliver built the fireplace. Construction was not his forte. Few things were, other than leadership and scooping other journalists. He had left his shabby display of mediocrity to pursue more important things, when Trudeau walked by. I was occupied with preparing dinner on an over-turned canoe when I heard him exclaim something like “Fuddle duddle,” I turned just in time to see him totally demolish Oliver’s sleazy structure with one foot. About five or ten minutes later he had completed a superb fireplace, complete with vents and a ready-to-light fire. He was a perfectionist in most things and couldn’t tolerate less than one’s best in anything. I thought it was this quality in him that frequently was ascribed to his impatience with or intolerance of inadequacy. His real fault, if fault it was, was to expect the best from each person, himself first.

The fuel supply, north of the tree line is dicey at best. For the most part, you have to bring fire with you, and we resorted to two sources. First, we brought charcoal. I know it’s a heretical thing to do and will be abhorrent to many. But it is practical, good for cooking, good for looking at, and doesn’t damage the environment.

Next, I went to the local sawmill’s discard pile in Whitehorse or Yellowknife, or wherever our jump-off was, and filled two or three cardboard boxes with small heels or blocks of wood, usually pine, maple or birch, sometimes cedar. This supply, carefully husbanded, and supplemented with the charcoal and whatever local scraps we found, generally got us through. 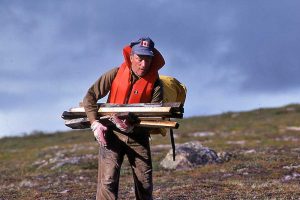 On our trip down the Hanbury, Trudeau spotted, on the shore of Hoare Lake, an old bundle of surveyor stakes, each two inches square and four feet long in a package of thirty-six, still bound with metal strapping. I heaved it into our canoe and it saved our skins, for the river was devoid of twigs until we got to the Thelon days later. Fortunately we had a saw, and could make perfect little fires. And the stakes were used to carry the wanigan, like a litter, around Dixon Canyon.

One of the most eloquent defences of the campfire came from Kotcheff when he was approached by Oliver about the possibility of having mixed company on the trips. His immediate reply was, “How the hell are we going to stand around the fire with our dorks in our hands if there are women around?” The experience of doing this predated my membership in the group, and pretty well everyone else I’ve spoken to about it is similarly perplexed. Oliver isn’t talking on this subject, and that’s the first time that has happened too. The matter will probably remain a mystery. 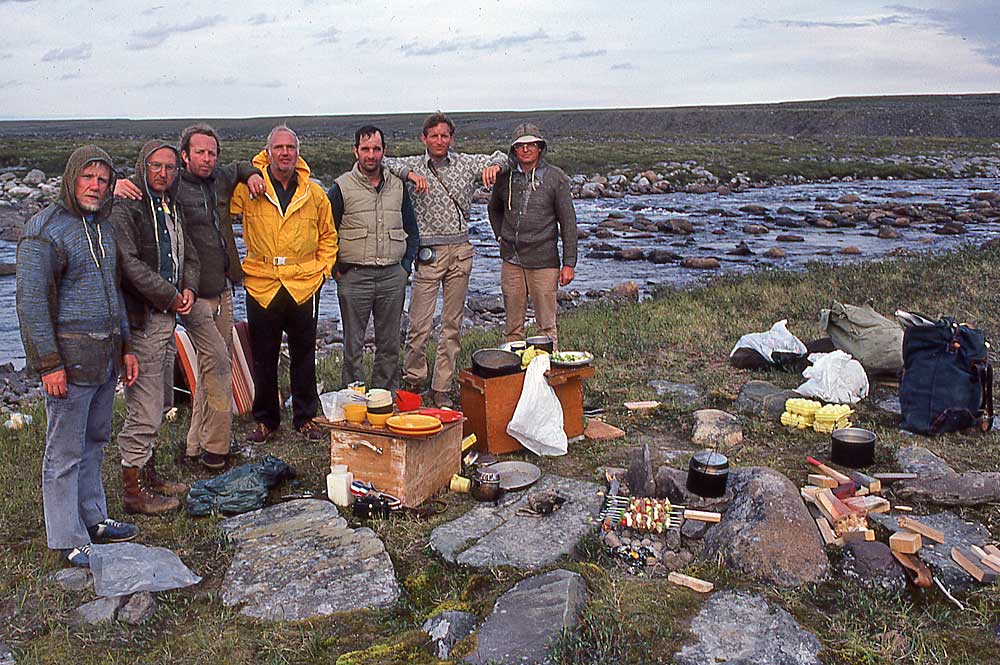