You are here: Home1 / First Five 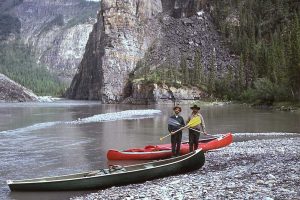 Craig and I at Pulpit Rock

There’s not much to recall about the short time we spent on the French and Magnetawan Rivers in the early 70’s. Paddling these waterways were simply a means to an end – to learn the basics of canoeing and prepare ourselves for the great challenge ahead: the mighty Nahanni in the summer of 1974.

Memories abound about the legendary Nahanni starting with our spectacular first campsite surrounded by the Selwyn Mountains.

The Nahanni is noted for a swift powerful current sweeping everything in its path, roller coaster rapids, vicious whirlpools and fearsome canyons, where one slip and you’ll never again see the light of day.

Fearing the worst about wildlife, we were armed to the teeth. Some of our friends predicted we would probably end up shooting each other, drowning or both. Our enemies hoped for all of the above.

Curiously enough, it was Craig who was on nightly watch; gun in hand in case of a bear attack. Curious because he used to fall asleep within seconds of his head hitting the pillow. Which often left me staring down the barrel of his pistol for most of the night. 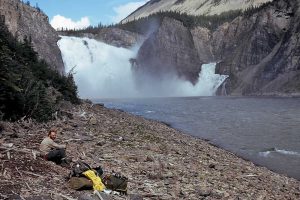 The Nahanni is where responsibilities and roles were permanently assigned: mine as equipment manager, cook and bowman – Craig as sternsman, bartender, security chief, and trip navigator. He would pour over the maps for hours to ensure we were heading in the right direction on the river. He rarely failed in this endeavour.

The other searing memory is the fear and tension which preceded the approach to our first major rapids and the exhilaration of running them successfully.

And then there was the magnificent, thundering Virginia Falls and the mysterious canyons below it. The wide placid river was suddenly transformed into a raging torrent heading spectacularly into a vertical drop of some 300 feet (100 metres) – twice the height of Niagara. We camped on a ledge jutting out over the Falls. An unforgettable view! 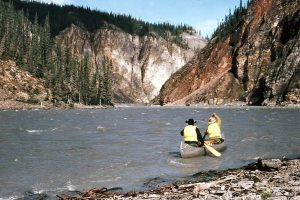 Some paddlers we met on the river took a photo of our mad dash into the unknown. Whenever I look at this photo, my stomach begins to churn. Ahead – those formidable canyons. Mere markings on a map. Once entered – no turning back and no climbing out. Sheer cliff on either side for miles. Worse still, we were heavily loaded with little freeboard. Capsize in the ice cold raging torrent – certain death. We were both terrified. But fear tends to mobilize all your strength and faculties and we survived to tell the tale.

The Gate and Pulpit rock in the third canyon provided yet another splendid impression. Sandy Richardson recorded our visit to this outstanding landmark. And climbing the mountain next to it provided us with a spectacular view of the river and the valleys below.

And the final exciting run was down the turbulent George’s Riffle between the towering walls of the last and most spectacular canyon on the Nahanni. We ended the trip at Nahanni Butte. The sense of achievement still resonates – an experience never to be duplicated.

In 1975, it was the Pelly – a wonderfully isolated river. The scenery is stunning. The wildlife plentiful.

The river has tough but navigable rapids. The 530 km-long Pelly was named by fur trader and explorer Robert Campbell in honour of Sir John Henry Pelly, governor of the Hudson’s Bay Company. It flowed through south central Yukon into the Yukon River and on to our planned destination – Dawson City. 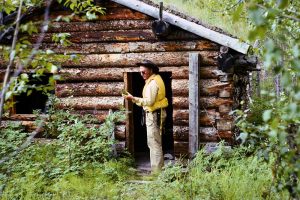 Home for the night

The single engine Beaver float plane dropped us just below Hoole Canyon which spared us a half-mile portage and another half-mile of lining. Who needed that! Just above the landing point, we discovered an abandoned trapper cabin and this would be our home for the first night.

We climbed a nearby hill for a panoramic view of the river and then hit the sack. It rained, but it was Craig’s snoring that left me with little sleep as it did every night on the Nahanni. But on this trip I came equipped to deal with it. Prior to setting out, and with Craig’s agreement, I had purchased an elastic head-strap that would keep his mouth firmly closed – a makeshift snore stopper. The following night, Craig secured his chin and soon fell asleep. Peace descended. However, an hour or so later Craig began gagging and choking. The strap had obstructed his breathing and I quickly removed it. The debate about whether I had saved his life or tried to kill him still rages.

Rarely did we break camp before 10:00, unlike the freeze-dry crowd who are gung-ho at 5:00 am to take advantage of the still air. Our mid-morning launch was into fast but easily navigable water. Half an hour later, we ran aground. Chitchat time was over as we hopped into shin-high ice-cold water to lift and drag our way free. It was cold, wet feet all day. For the rest of the trip we resolved to stay focussed. 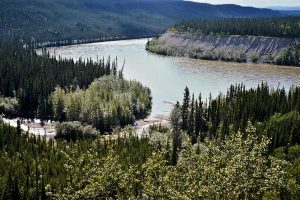 Ironically, what sticks most in my mind about the Pelly trip was the way it ended – in Dawson City. The city’s name is synonymous with the 1898 Klondike Gold Rush – conjuring up images of Robert Service, Jack London, Bonanza Creek and the multitude of gold rush prospectors, gamblers and prostitutes staking their claims to hidden fortunes. Imagine stepping out of a canoe and walking into the 1920’s. Old historical buildings are still scattered throughout the city.

Craig and I took on the wild lower Missinaibi River in 1976. It is one of the longest free-flowing wilderness waterways in Ontario. This Canadian Heritage river doesn’t compare with either the Nahanni or the Pelly but the canoeing was challenging amid unspoiled scenic beauty. The rapids – tough but navigable.

It remains, for the most part, in its natural state untouched by logging and mining and has changed very little since it served as a major route for the fur trade.

The fishing was as good as it gets. The high point was Thunder House Falls, where the Missinaibi River crashes through a narrow gorge in spectacular fashion.

Our trip ended in Moosonee, 19 kilometres from the southern end of James Bay. The town is not connected to any road system and the only way in and out is either by train, plane or canoe. We parked the canoe and booked into the Moosonee Lodge for a hot shower, a meal in the dining room, and a sleep in a real bed.

The Missinaibi has been described as a river of ‘constant delight’. Sadly, it was the last time the two of us would ever again canoe a river, just the two of us.