Our voyages through the vast geography of the Arctic have always been in July or August. For us, the Arctic wears the face of summer; only theoretically (and through the lyrics of Mr. Service) do we know what the rest of the year is like, but we don’t discuss it. 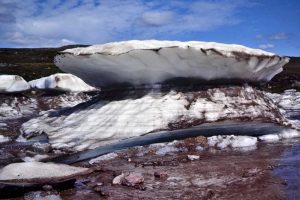 As we drift along, we get intimations of what normal really is. A bank of hard-packed snow avoiding summer in the lee of a north-facing bluff will get our attention. Ice frequently jams the rivers and lakes until late June, or early July. Once, along the Burnside River, we came suddenly upon a whole colony of ice floes, marooned on sides of the river, like a gallery of immense sculptures, a Henry Moore Centre in a dream of snow and ice. As they sat melting oh so slowly in the tenuous warmth of the oblique sun, they were crystallizing into long pencils of ice which broke off easily. 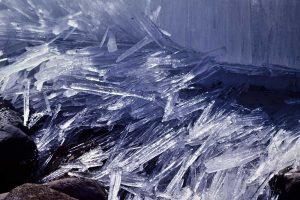 Occasionally, a whole rank fell of its own accord. Presumably these leftover ghosts had been part of a huge ice jam – the deep gouges in the banks on either side seemed to suggest it – and had then been abandoned by a rapidly dropping water level during the spring run-off. The hues of aqua-green and blue-white, smudged with dirt and peppered with small stones and sand, were a reminder that we were there during a period of forbearance. Obviously there were times here when violence was extreme and conditions unbearable.

Lunching With Wolves by John Gow

To most canoeists, wolves, if seen at all, are but a fleeting presence, white phantoms on distant hillsides, mournful howls across twilit lakes. That was not the case on the lower Burnside River. 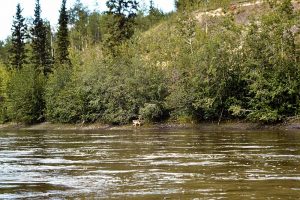 Near mid-day we saw a lone white wolf beside the river, watching our approach. As we neared she calmly walked up the bank and disappeared; we pulled into an eddy for our lunch break, hoping for a “photo op.” We topped the bank, and there, on the flats beyond was the wolf. With cameras clicking, we moved slowly toward her. She watched with interest until we were close, then moved away, stopping, barking and yapping whenever we stopped. This went on until we had our photos and lunch was called.

The wolf seemed unhappy with this turn of events. She barked and yipped, hopping back and forth on her front paws. Finally she trotted onto a nearby hillock to lie in the sun and keep a watchful eye on the interlopers. Just as lunch was done another white wolf came trotting over a small rise from downriver. She played the same game; as we approached, she retreated, when we stopped, she waited, hopped and yapped.

There was no doubt that our job was to follow her into the hills, and we could only conclude that there was a den nearby, and they were sent to lure us away. 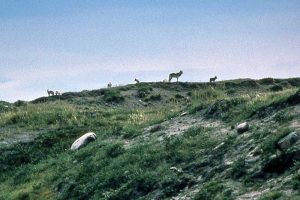 Once back on the river we drifted silently around a horseshoe bend, and there at the base of an esker were nine wolves, including four adolescent cubs. The leader was enormous, half again as large as the other adults. As the river carried us silently closer, the pack followed their leader single file up the esker. They stopped at the top, silhouetted in a line against the sky, peering down at the strange creatures on the river below.

All at once, eight wolves disappeared, leaving only the leader to watch us. As we drew closer, he sat back on his haunches, pointed his nose at the sky, and let out a long eerie howl. When he stopped, I howled back and he replied. After three or four exchanges he too disappeared, leaving behind eight awestruck canoeists.

Back to Burnside River Page