You are here: Home1 / Funeral 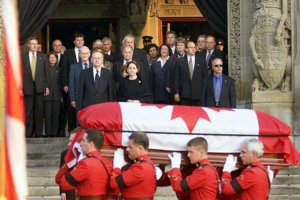 The day began at City Hall. The casket bearing Pierre Trudeau was removed and driven to Notre Dame Basilica. It was accompanied by ten RCMP officers marching alongside.

The streets around Notre Dame were lined with mourners. As the hearse passed, many applauded. Others wept. Trudeau was making his final journey through his native Montreal.

“An occasion of national mourning, a historic moment,” is how Governor General Adrienne Clarkson described the arrival of Trudeau’s casket at the Basilica. It was 11:00 a.m. 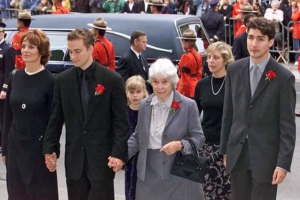 The canoe group had already arrived at the Basilica for the state funeral – one of the largest in Canadian history.

Just under 3,000 people were inside Notre Dame for the service. Giant screens were placed outside for those in the front square. But the Arctic and Rideau Canal Canoe Club members were honoured as special guests and seats were reserved for us inside.

We were paying tribute to the dominant figure of 20th century Canada. He was also our cherished canoe companion. So on this occasion, we were saying goodbye not only to a former Prime Minister but to the man who joined us on three canoe trips in northern Canada – trips that we would never forget. 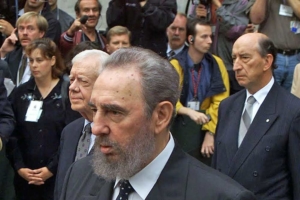 The funeral, a traditional Catholic mass, was conducted mostly in French. Prime Minister Chretien delivered the First Reading. Trudeau’s son, Sacha, delivered a special reading from the Prophecy of Daniel.

But it was the eulogy offered by Trudeau’s eldest son Justin that moved and touched those inside the church and those listening outside. 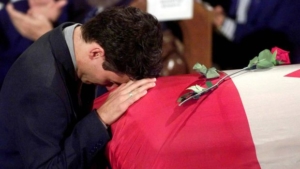 Justin spoke of Trudeau as a father who “loved us with the passion and the devotion that encompassed his life”. He then thanked Canadians for their outpouring of emotion.

“I love you, Dad,” he said before bending to kiss the flag-draped casket of his father.

The funeral concluded with a loud pealing of the cathedral bells, applause and singing of O Canada.

At the reception that followed the service, I was talking to Michael Pitfield and mentioned that I was member of the canoe group and he said – ‘well that explains why you are here then. The canoe group was very important to Pierre.’

One of our group, Ted Johnson, who had been involved with the funeral arrangements, had this recollection:

‘A small chapel off to one side of the Basilica was used as a holding room to bring together the pall bearers. I noticed Jimmy Carter standing there alone, with no one to talk to. Since Peter Stollery knew him from The Interaction Council, I brought him over to talk to President Carter. While we engaged in pleasantries with the former President, I noticed Carter was no longer paying attention to our scintillating conversation and seemed to be looking over my shoulder. I turned around to see Fidel Castro approaching.

Carter broke off our chat, shook hands with Castro and switched into Spanish. Carter then switched back to English and said “Now there’s one thing I won’t talk about with you today, Mr. President (brief pause) …baseball!”. Castro laughed.

The Cuban baseball team had administered a stunning defeat to the Americans at the Olympic Games a few days before this encounter.

I believe this was the first face to face meeting between Castro and a sitting or former US President in ages, if not since the Cuban revolution. And the Canoe Group was there!’

As we were leaving the Basilica a television reporter asked myself and David Silcox what it was like canoeing with Trudeau. I replied that there was a sense of intensity when you paddled with him. David added jocularly…he was a perfectionist….he did the dishes better than anyone else. We could also have mentioned that he was an incredibly talented canoeist.

And so ended a most remarkable day.