You are here: Home1 / Lawn Chairs, Big Mama and Hipwaders 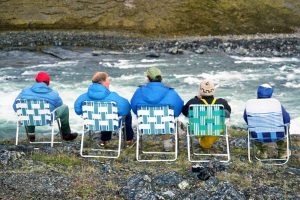 In 1990 when we tackled the Ajaqutalik River on the Melville Peninsula, we packed aluminum lawn chairs for the very first time.

This innovation was the brain child of the one and only Senator Peter Stollery. On an earlier trip he had showed up with a mosquito jacket, which we all thought was ridiculous. Before long, however, we noticed that we were taking turns standing next to him to bask in the bug-free zone that surrounded him like an aura.

And now, here we were again facing yet another Stollery eccentricity – Lawn Chairs! And on a wilderness canoe trip! This time, he went too far. 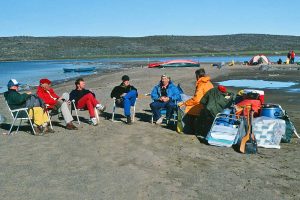 On the Back River

After we stopped laughing and teasing Peter, we deigned to try them out. Not only ‘not so bad’, but really quite comfortable. You can’t imagine how wonderful these chairs can be after a hard day’s paddle. A little bulky, perhaps, but extremely light to carry. And what a way to enjoy a greek salad, barbequed ribs, and a glass or two of a fine, vintage wine. Compared with sitting on a lumpy, hard rock, or a slimy, wet log or, worse still, squatting awkwardly in a patch of muddy damp tundra, these babies were luxury itself.

As an added bonus, lawn chairs on the bottom of a canoe keep bags dry if water accidentally gets into your canoe when you’re running a set of rapids.

Hard core wilderness enthusiasts will undoubtedly scoff at this idea, but they should try them out first before passing judgement. So take the advice of us seasoned connoisseurs and canoeists – never leave home without one.

Big Mama on the Ajaqutalik

Big Mama was the brainchild of Peter Stollery – he of lawn chair shame turned to fame. It’s quite spacey and holds 6 even 8 people comfortably. It had become our communal meeting place – a haven in poor weather. Because of its size though – it dwarfed all the other low slung tents – it can be unstable in high winds and sticks out like a sore thumb on the barren landscape.

When the Senator first introduced ‘mama’ to the canoe group, he was once more the object of ridicule.

So, what the heck are these seasoned, hardy, no-nonsense wilderness canoeists doing in Big Mama on any given night?….shamelessly sipping rum daiquiris while sitting comfortably on lawn chairs.

In 1992, following his success with mosquito jackets, lawn chairs and big Mama, Peter Stollery introduced yet another first – hip waders – in preparation for our trip down the frigid Ruggles River on Ellesmere Island. We encountered considerable ice along the Ajaqutalik River in 1990 and most of us felt Peter’s latest suggestion was a good one.

There are great advantages using hip-waders under certain conditions. They’re perfect for pulling a canoe through shallow freezing water or walking through muddy terrain. But the waders are less than ideal and can be extremely dangerous if you wear them paddling a canoe that swamps or overturns in deep water. Waders quickly fill up and become anchors on your feet that pull you down. They can also trap air and act like a balloon that floats your legs and submerges your head.

There was an incident at about the halfway point down the Ruggles that raised serious questions about the Senator’s latest claim to fame.

Case in point. I recall Peter doing a pratfall in fast-running water a few feet from shore at our camp site. He was wearing his waders. True to form, the boots filled up and dragged Peter out and into the main current and deeper water. Down river he was pulled under an ice sheet covering a section of the river. He surfaced in an opening just below this patch but was dragged under yet another ice pack and went under for the second time. He surfaced shortly and made it to the opposite shore. Fortunately he survived a third and potentially fatal dip.

We joked at the time that had it been otherwise he would have at least died with his rubber boots on. 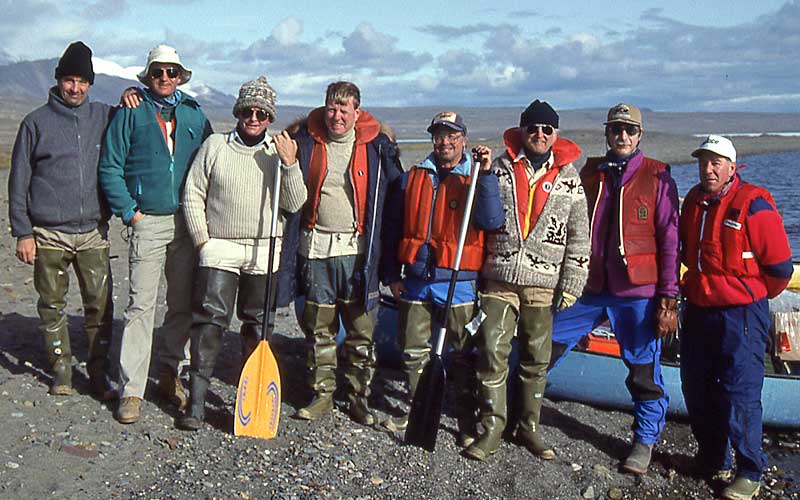