You are here: Home1 / Bears 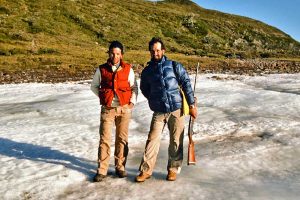 The matter of bears is based on almost as much self-interest as that of booze, for the fear of getting too close to one is real. Although one may know, intellectually, that bears are as likely to be as frightened of us as we are of them, it’s not the sort of thing that you want to put to the test. The legends of rampaging bears, carnivorous, man-eating, hugely powerful, and ruthless, contribute to one’s general sense of malaise.

The first discussion of bears occurred with Oliver, Gow, and Stollery in the Grill Room of the Chateau Laurier Hotel. The first point stressed was that we were going into the land of the big grizzly, the super grizzly of Alaska. What sort of firearms would be best suited to protect us from Them?

Grizzly tracks on the Back

This seemed to me an unpromising start, for I am against guns in general and guns in the wilderness in particular. Oliver had great faith in his about-to-be-acquired .357 Magnum. Stollery was flat out for a shotgun, which, he said, could “blow a sufficiently large hole in a grizz to slow it down.” Gow’s preference was for a .38 revolver. Stollery snorted and pointed out that so light a piece would never stop a grizzly bear: “The bullet would ricochet off its skull like a rubber ball off concrete.” Gow said it wasn’t meant to. What you did with the .38 when a bear charged, was put it into your mouth and pull the trigger.

“What if someone gets up to pee in the middle of the night,” asked Oliver, picking up the theme,“how would you know it wasn’t a bear?”

“Well, you’d have a flashlight, for heaven’s sake,” Stollery replied, somewhat exasperated. Then he relented slightly: “Still, it could be a recipe for confusion.”

“Wouldn’t it be better,” said I, drawing on my early years in the Boy Scouts, “just to avoid the bears as much as possible, say by leaving the food outside and away from the tents, by cleaning up as much as possible and perhaps by having some noisemakers. I’ve heard that bears don’t like noise.”

This last was a stupid suggestion, since we didn’t like noise either. But what we did agree to do, and each member did that year, was carry a whistle, which we thought could be used for safety, to communicate with each other, and to scare off the bears. Stollery blew his so shrilly and so often that we began to wish we hadn’t brought them at all. Mercifully, the fad was short-lived.

Discussion returned to confusion in the dark, until someone finally pointed out that north of the Arctic Circle we would be in constant daylight. 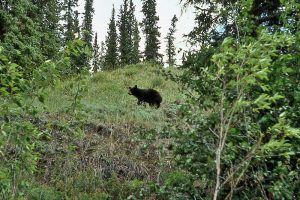 Notwithstanding all the talk then and later, we did end up in Alaska with a pistol and a shotgun (once Oliver’s father’s) which was lost, appropriately enough, by Stollery in his annual upset, but we never had to shoot at a bear. Although at one point, in the middle of the night, I heard Pelletier get up to relieve himself. His and Stollery’s tent was close by, and I heard the following conversation:

“Peter, I just saw a bear.”
Stollery, groggily and still mostly asleep: “What kind of a bear was it?”
“It was a little bear, about two feet high.”
“What colour was it?”
“It was black.”
“Well, it must have been a brown bear, then.”
“No! It was black. For sure.”
“Well, all the black bears in this part of the world are brown. So go back to bed.”

It was a surreal exchange, but in fact Stollery was absolutely correct, even in his sleep. Black bears come in two colours. 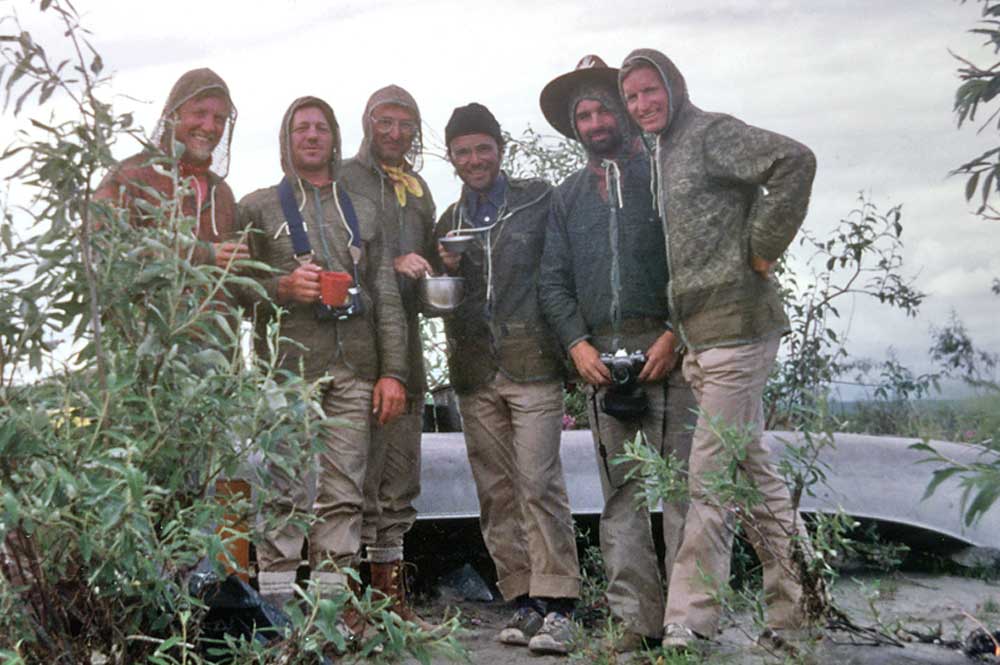