You are here: Home1 / Pioneers 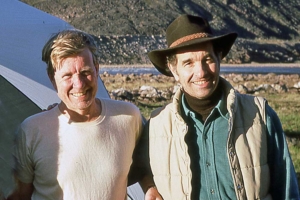 Others have described the Arctic and Rideau Canal Canoe Club’s problems that ended the first Isortoq adventure. Tim and I determined that we would finish the river the next year. But no one from the first Isortoq trip wanted to go with us for understandable reasons. The river was too dangerous. John Godfrey, a regular, had been unavailable for the first trip. Tim and I persuaded him to come but we needed a fourth.

“Have you ever been on a canoe trip”, I asked my neighbour and good friend Joe Egerszegi?

“Yes. In Algonquin Park. With the Boy Scouts. It was great”. “Well”, I said. “You’re just the man we’re looking for” 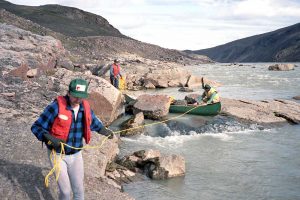 And so it was that a couple of months later, four of us in two canoes put into the water on the right hand side of the river and made a dash for the other side. That in itself was quite terrifying because we had to avoid an obstruction near the put in. If we hit it, we would drown for sure. There was no getting out of the river at that point. The freezing water was going like sixty. 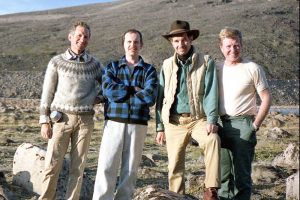 It turned into one of my most memorable trips. With only four people the dynamics of companionship change. It’s quieter, particularly as for much of the time we were nervous and being very careful. The scenery was pure grey rock, as it is on most of Baffin Island. We felt the remoteness. It was dramatic. No one was likely to come here. After some days the river calmed down and there were sand bars on one of which was the Lost Canoe from the previous year.

For me the most unforgettable moment was when we turned a corner and entered Isortoq lake. The water was green and still as glass. High above on a pinnacle of rock, the screech of a rough-legged hawk broke the silence, as we paddled the shore looking for a campsite. The bare rock cliffs surrounding the several miles of green water were quite high. It was mostly overcast but the sun glowed on the heights. We found a barren campsite on the right hand shore. The only evidence of life was a couple of longspurs, sparrow-like birds, flitting among the boulders. That there were just four of us made the remoteness more intense. More than on any other canoe trip high in the Arctic, we felt that we were utterly on our own.

Indeed, it was great.