Kahawa in the morning

You are here: Home1 / Kahawa in the morning

The Smell of Kahawa in the Morning by David Silcox 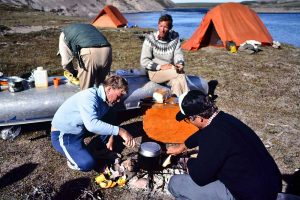 Kahawa at the ready

My bleary eyes caught the time, 8:30, on my trusty watch and, out the tent’s rear window, Stollery, bending over the fire. From time to time he backed away from the smoke, as if he were feinting with an unseen sparring partner or T’ai Chi instructor. He was dressed, if that is the right term, in his long johns, which were a dirty white, and his orange down jacket which had two gaudy decals pasted on the breast and arm. This sensible protection against the chill of the hour was belied by his bare feet.

The fire continued to smoke discouragingly. I lay back, awake and warm, and suddenly heard Stollery say: “No! No! No! You don’t do it that way, for Christ’s sake!” And then someone else, who sounded a little like Stollery, replied, “Well, how else are you going to do it?” To which Stollery replied, with a tinge of exasperation, “Look. We’ve always done it like this. Usually it works every time.”

I looked out again, but he was still alone, instructing himself on fire-making drill. Now the fire was crackling briskly, so his alter-ego-self had lost the argument either about how to go about laying it, feeding it, or fanning it.

Occasionally, as he waited for the billy to boil, I heard him mutter “Kahawa,” slang which, he had explained the evening before, was a Central and South American word for coffee he had picked up on one of his many trips there. Shortly, I heard him counting the spoonfuls of coffee into the pot, “. . . six, seven, eight, and one for the pot. Okay. Now, let’s let it settle a little. Kahawa…. Kahawa.” 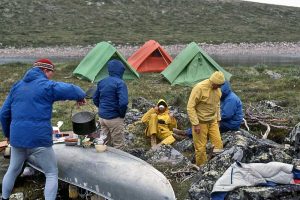 Then I watched him swinging the pot in full arm-length circles, the centrifugal force thus generated sending the coffee grounds to the bottom. After a few minutes he announced firmly, but not loudly, to the sleeping camp, “Gentlemen, your coffee is served.”

No one spoke or moved.

A minute or two later, however, Oliver broke the silence. “Commander Stollery, would you be kind enough to bring a cup of your delicious coffee to your leader? Just a little cream would be fine.”

Another voice, from another tent, broke in harshly, “For Christ’s sake, Oliver, get up and get your own goddam coffee, or I’ll give you a coffee enema!”

There was another long silence.

Then Kotcheff hoved into view to begin the preparations for breakfast. He grumbled his way over to the fire.

Suddenly, his voice rose loud and in anger. “Stollery! You’ve burned nearly all the wood we’d set aside to make breakfast. Are you crazy or what?” 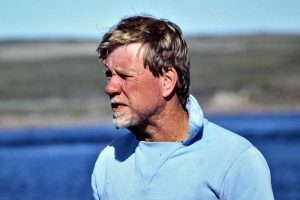 “Well, Tim,” Stollery’s voice was low, level, polite, and uninflected, “I can’t boil water without fire. God knows, I’m willing to try, but what’s the goddam wood for anyway? If you don’t want it used, just say so, and I’ll have Barzini make the appropriate arrangements.”

Barzini was a fictional butler whom Stollery had invented one day on the Noatak River when some particularly stylish execution was called for. My recollection is that he began life as a Milanese tailor, but once created, Barzini grew quickly in stature and in potential accomplishments. He was sent ahead to select, prepare, and equip campsites; he could be called on to provide gourmet foods; he was, in short, the model for a miracle manservant who not only could fulfill one’s every need, but could anticipate what those needs were. The only thing that made us a little apprehensive about Barzini, was that Stollery imagined that one day he would manifest himself as “a gentleman in a big fur coat,” as we euphemistically referred to the grizzly bear.

“Jeeeesuuuus…..” The groan was long, drawn out, and despondent. Kotcheff was in wood-deficiency despair. Then a sigh and a long silence. I was just wondering what was happening and was about to peek out again when I heard Kotcheff’s conspiratorial request to Stollery: “It’s good coffee, but a shot of your rum would sure kick the crank over. Whataya think?”

“Shush! Not so loud,” Stollery said in a whisper, “or everyone will want some. Let’s see what we can do. Supplies are very low, so you’ll appreciate why we won’t tell the others. You’ve got to keep this to yourself.” Out of Stollery’s stores came a straw-matted bottle of overproof rum that had started life in Jamaica or Caracas many years ago. I heard a chuckle and then, as life from Oliver, Godfrey, Johnson, and myself began to show, a hasty rustle as the bottle disappeared. 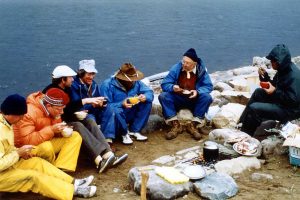 I got up knowing that, for a well-braced coffee, I would have to lean heavily on the moral impropriety of misusing the firewood and even then would probably have to barter one of my cans of beer at lunch time.

Stollery’s prowess at the campfire is limited to making coffee and eating. Indeed, my earliest trip with him was not one that inspired confidence, for he used up a lot of scarce wood, finally got the coffee made, then accidentally burned himself and spilled all the coffee except his own which, wisely, he had already poured. This, combined with the constant blowing of his whistle (we each brought one that year to scare off the bears) and his running patter about the whistle actually being sounded by a “gentleman in a fur coat,” were slightly surreal, if harmless, things to awaken to. At the least one awoke in a contradiction between anger and laughter, with coffee usually at the ready.