You are here: Home1 / Cuisine

The Tundra Gourmet by Tim Kotcheff 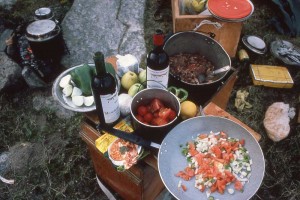 In the beginning, I was a meat and potatoes kind of cook – burgers, bannock, beans, and granola. Kept things simple. But my cooking was, well, adequate, but not always to everyone’s liking.

There was discreet grumbling among some of our spoiled high-powered canoe team for something a little classier – wilderness haute cuisine so to speak.

The first recruit to help raise culinary standards and please the palates of such a demanding arctic clientele was epicurean David Silcox who brought impressive skills and flair to our wilderness eating experience.

Later it was John Macfarlane – a man of exquisite taste and refinement, a wine connoisseur, a menu designer extraordinaire. The quality of food inched up yet another notch.

Who could forget Denis Harvey, wizard of the outdoor BBQ?

And of course the incomparable Peter Stollery – who caught, cleaned and turned fish and milt into savoury delicacies.

But it was John Godfrey who sliced, chopped and peeled his way into our hearts and in due course, excelled as king of the starters. His speciality – smoked salmon, capers, onion garnish, and cantaloupe slices à la Pinot Grigio. 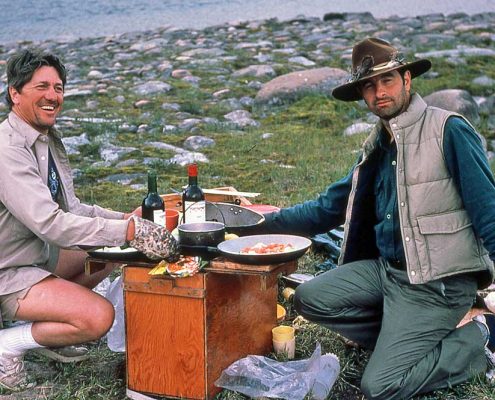 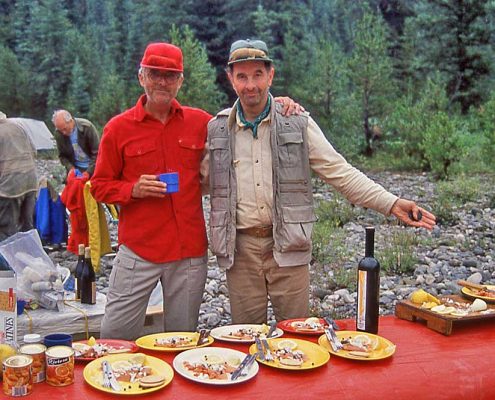 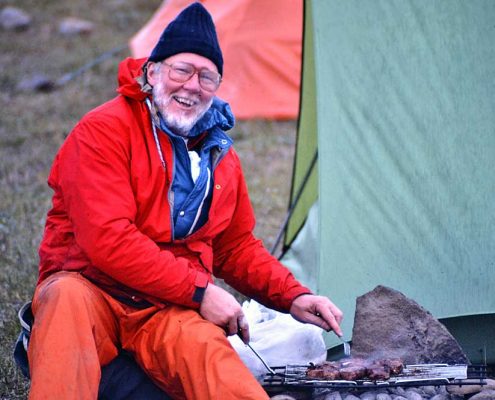 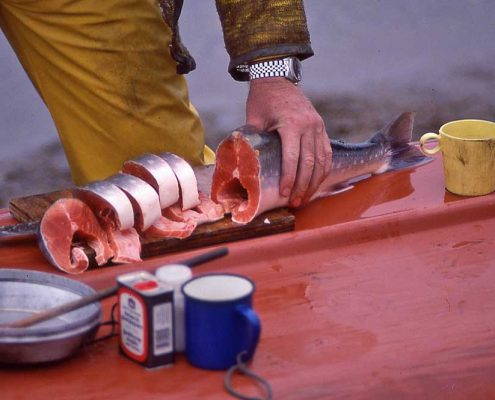 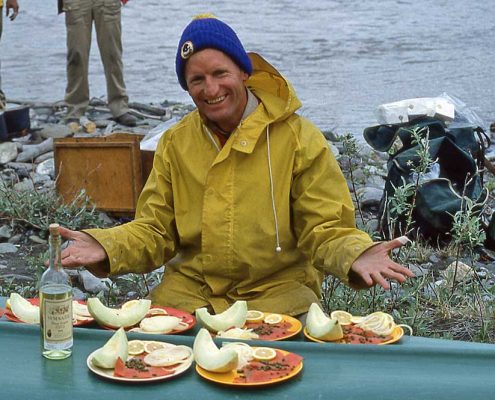 A splendid kitchen crew whose names and culinary exploits still resonate in five star restaurants above the Arctic circle and among the Barren land cognoscente.

Haute Cuisine in the Arctic

When paddling northern rivers there are two important considerations – stay dry and eat well. After a hard day’s paddle with canoes safely beached and the tents securely in place, the gong sounds for happy hour. Time for Craig Oliver’s famous Rum Daiquiris or maybe a bottle or two of Veuve Cliquot.

We settled back comfortably in our lawn chairs, time to relax, unwind, and discuss the day’s events. Bartender Craig Oliver had already swung into action. His drinks – a big hit. Served out of a cooking pot, it was “one for you, one for you, and one-two for me”.

What could be finer than smoked salmon accompanied by a glass of champagne or a rum daiquiri. Meanwhile the chefs were busy stoking the cooking fires (in this case a Coleman gas stove) as expectations began to rise for another spectacular creation amid the vastness of the northern tundra.

The main course? Charbroiled lamb chops, rice pilaf, served with 1996 Stemmler Pinot Noir. And oh yes, how about a snifter of cognac and a fine cigar while basking in the splendour of an Arctic sunset? Hard to beat.

At times like these, we often joked that we operated the best restaurant north of the Arctic Circle. Purists may scoff at the mere thought of haute cuisine on the trail but it worked well for us. And it starts with a good menu.

Weeks before takeoff, the serious work begins. Menus are planned, food is procured, wine is selected, packing starts, meal by meal, and then day by day. Index cards record where each item is stored. Cooking utensils are checked and emergency provisions are assembled since the conditions determining the timing of the pick-up are never perfectly predictable.

While meals were planned for the entire trip there were adjustments for bad weather – a one pot meal on cold and rainy nights (preferably chilli), but on a good night we brought out the charbroiled lamb chops and Greek salad. An extra stove was mandatory. And of course, our famous ‘Freezer Box‘ contained the pre-frozen food.

There is no wood above the treeline. For barbeques, we lugged a bag or two of charcoal. There were cases of wine, aquavit from Scandinavia, and bottles of champagne from France. Once, for shame, ice cubes from Norway. Yes ice cubes! And nothing was ever left to chance or the imagination. Of course there was a price to pay on portages in terms of weight and diminished freeboard when it came to rapids. Nobody cared. 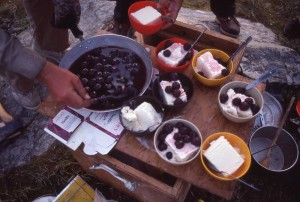 When meal preparations were in high gear, our kitchen canoe prep area resembled the kitchen of Scaramouche or Alo in Toronto.

But the pièce de resistance was the famous Cherries Jubilee Flambé on day ten- the story of which has taken on legendary proportions. Warmed bing cherries in juice over vanilla ice-cream, flambé with cognac. What had been quite overlooked, however, was that despite the late hour it was still daylight. A flambé of anything in the Arctic, is like setting off fireworks on a sunny day.

And there was more, much more, tantalizing more. Take a gander at the photos diehard northern canoeists and eat your hearts out! 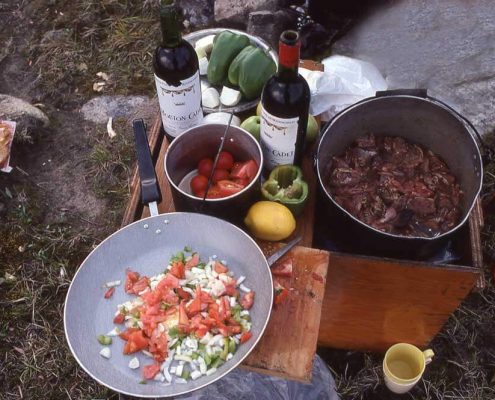 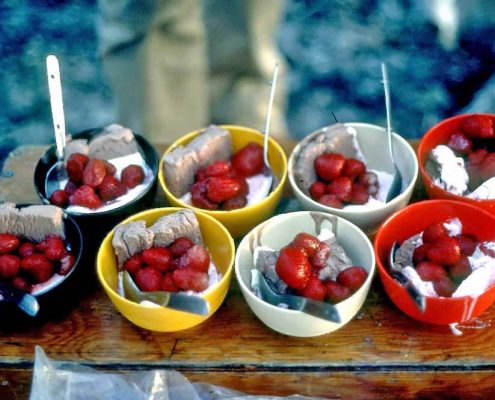 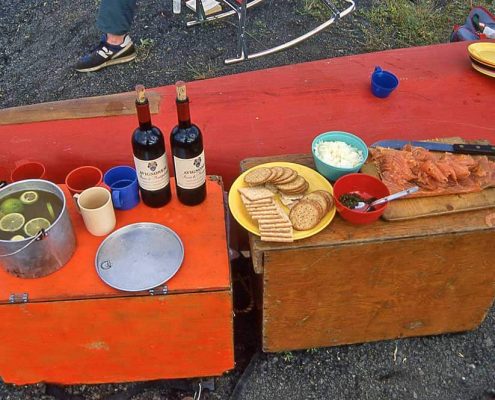 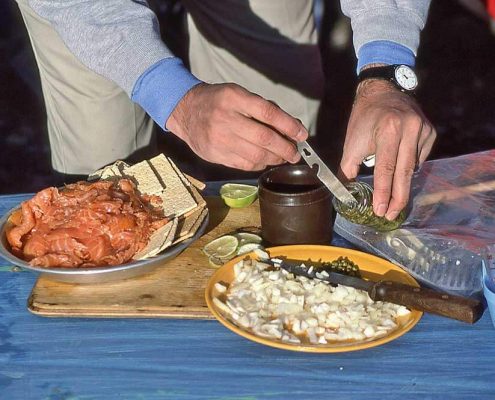 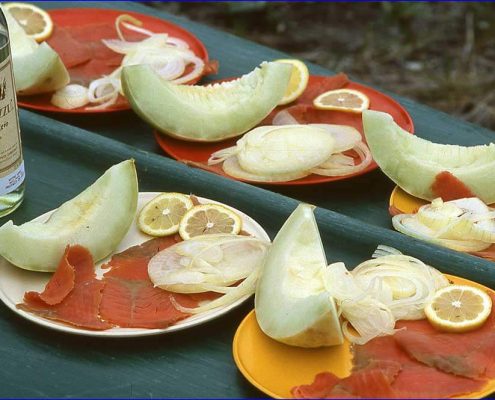 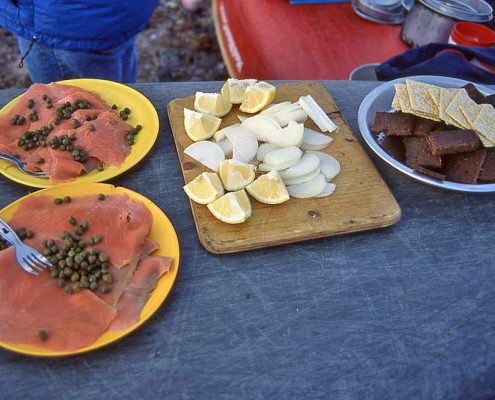 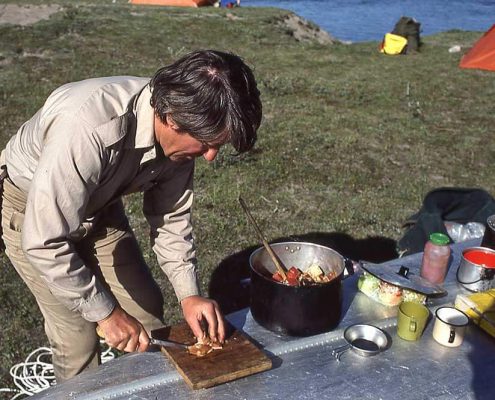 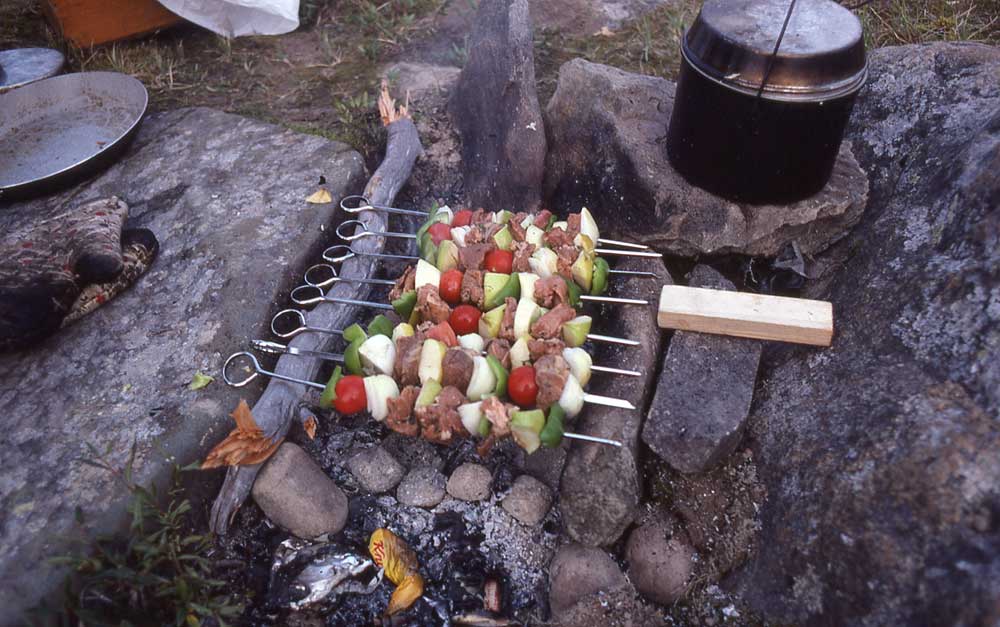 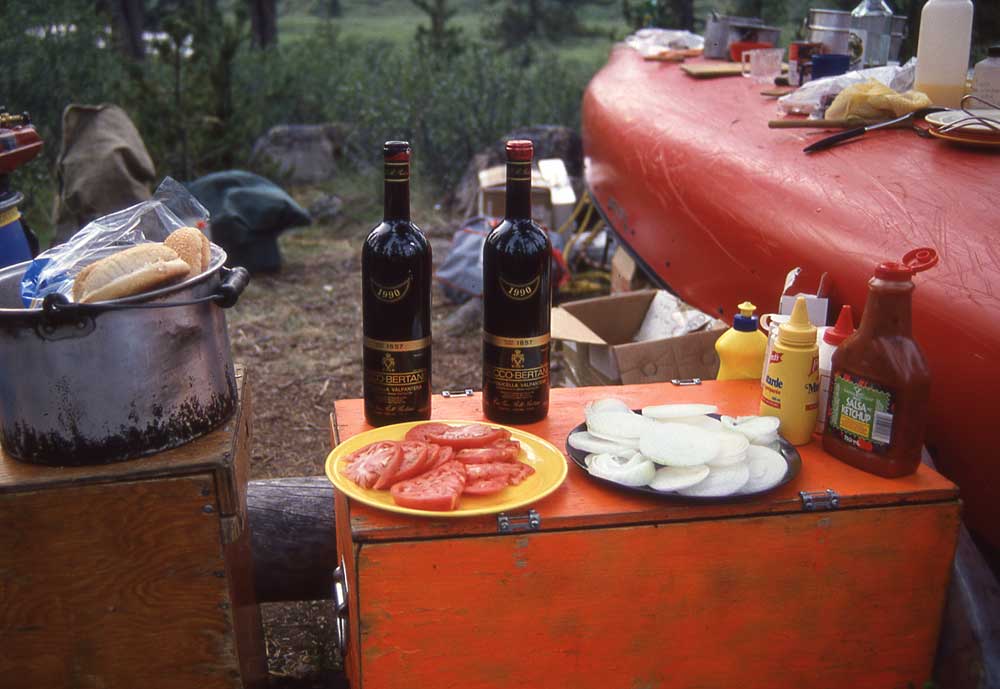 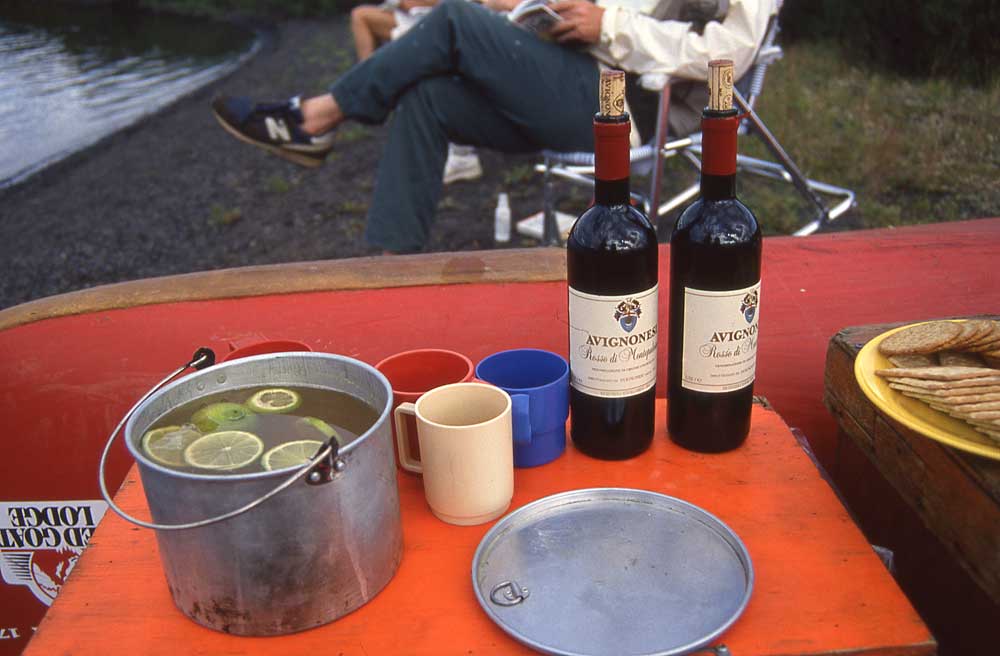 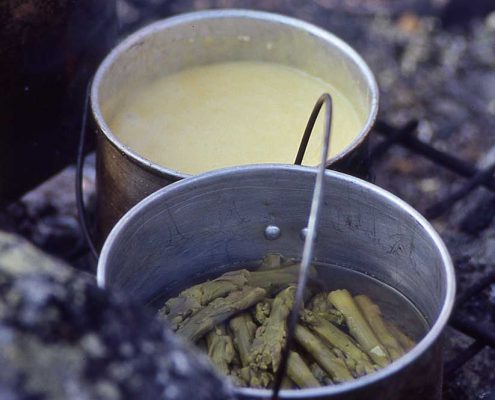 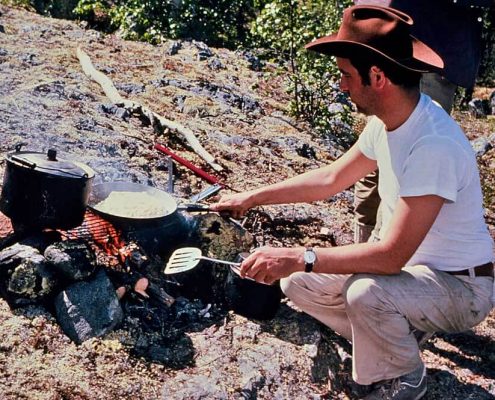 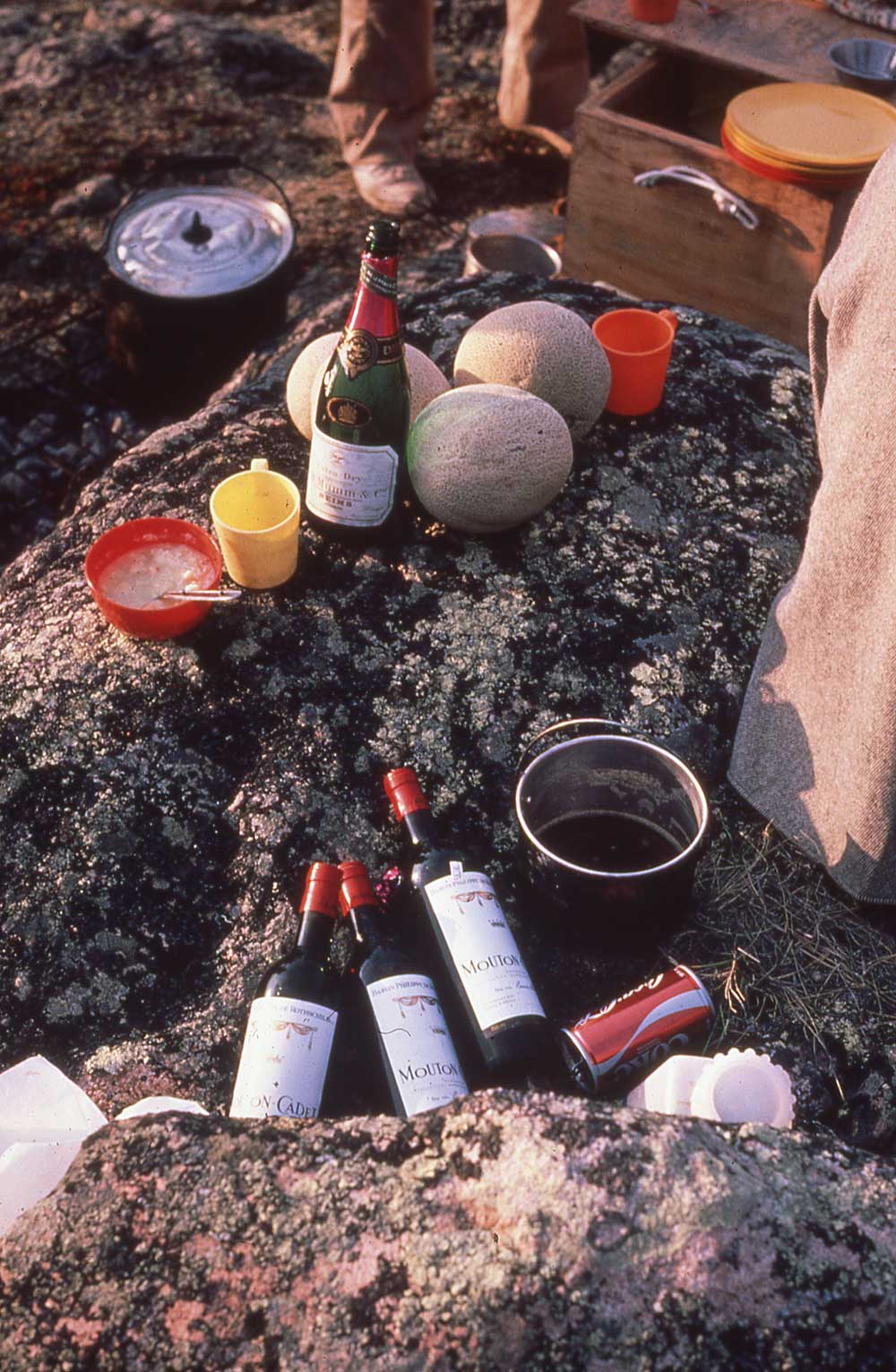 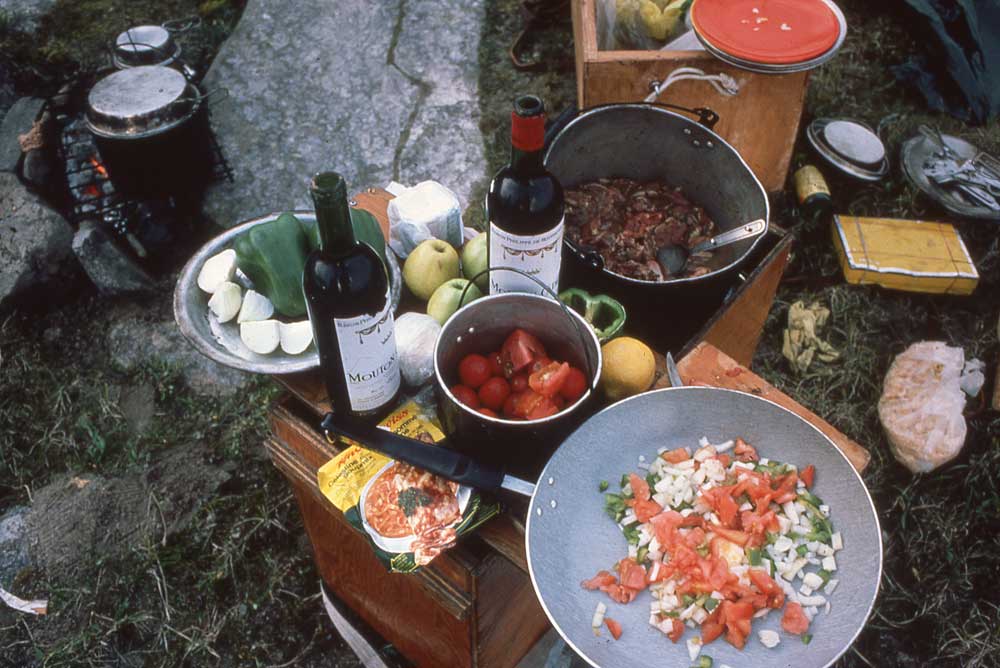 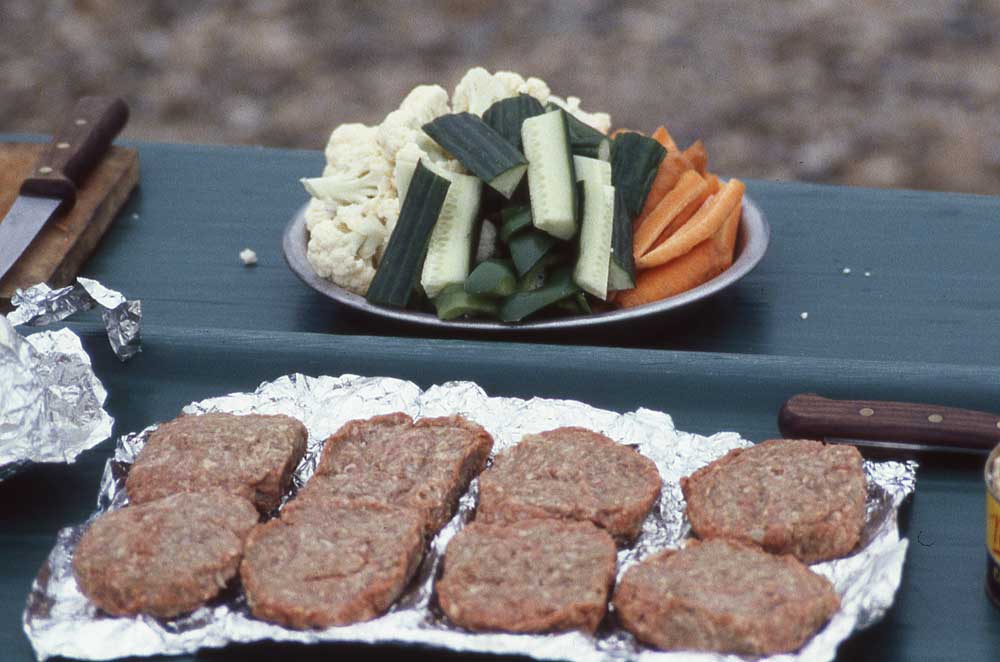 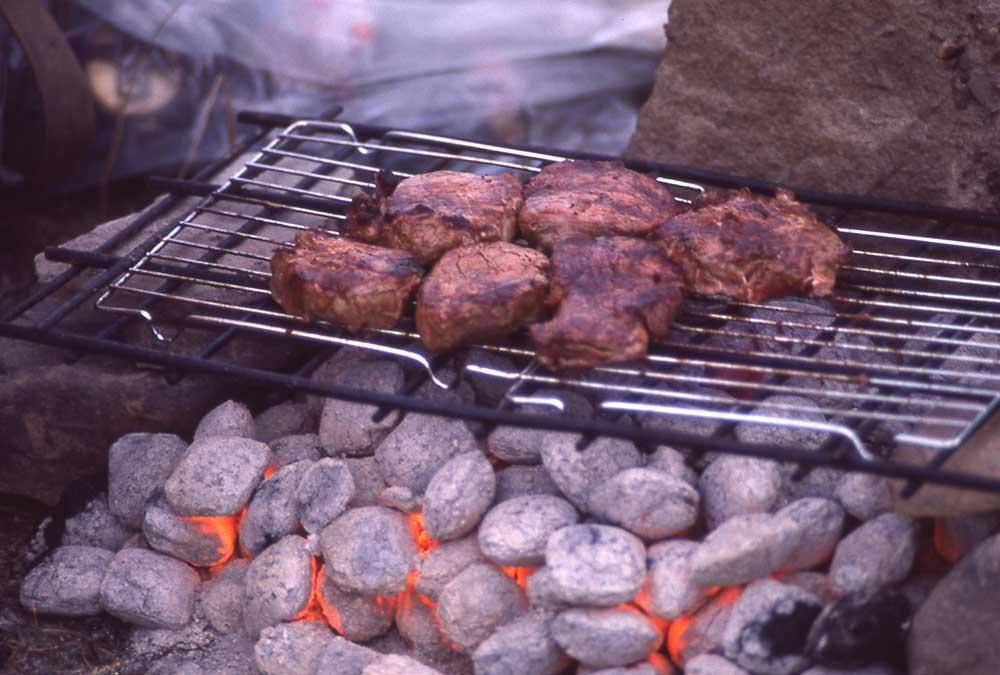 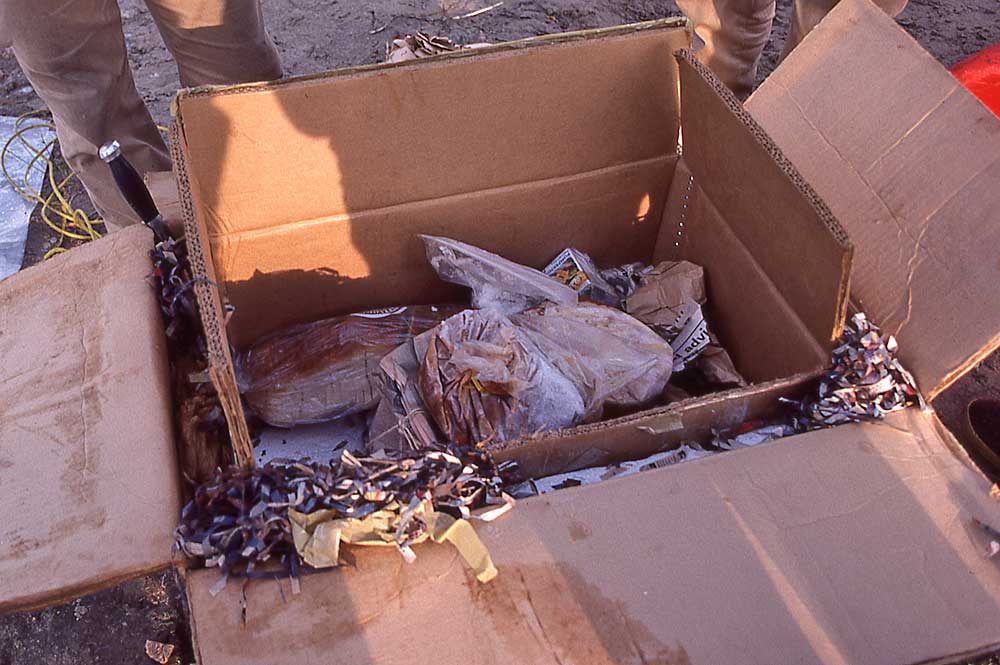 About the Freezer Box

For the Canoe Team Stag Weekend, John and I will be collaborating on the cuisine to make sure all the important tummies are pleasantly filled and you’ll be happy to know everything’s already under control. MORE…