You are here: Home1 / Fishing

Fishing In The Far North by Peter Stollery 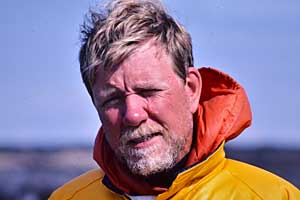 When I first joined Tim and Craig in 1977 on the Snare River trip, I hadn’t thought about cleaning fish for years. Unfortunately for me, I was taught to clean fish when I was six or seven years old in Northern Ontario by my maternal Grandfather to whom I was very close. My mother’s family were Scotch people from the Ottawa valley in the timber business. My Grandfather who I called ‘papa’ and who I was very close to, was a civil engineer who specialized in log construction and who spent most of his working life north of North Bay around the Cobalt and Temiskaming area. He retired in the 1930s, to a log cabin on Jumping Caribou Lake near Temagami. 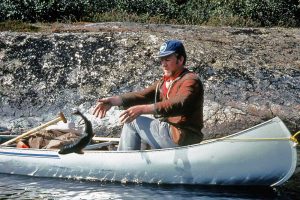 The one that got away.

Papa was born in the Pembroke area, just after Confederation and I spent my summers with him in the bush as a young boy during World War Two. Unlikely for a Toronto boy, I was taught to split wood and fillet fish, particularly pickerel. Your fingers were rapped if you left meat on the skin. I was taught the bush tricks that all boys learned in those days. When I first canoed with Craig and Tim, I was completely unfamiliar with aluminum canoes and bashing over rocks in a canoe. When I learned to move a canoe around they were canvas and touching the bottom on a rock or anything else was cause for loud voices.

In those idyllic days I would row Papa around in the basswood boat in the evening to catch pickerel. There were no outboard motors in Canada during the war. Fishing with a June Bug and a worm never took more than half an hour to get a couple of nice fish. This was before the tourism and over-fishing in northern Ontario after the War. Fishing was still the way it had been for thousands of years.

I cleaned the pickerel and filleted them and we ate them for breakfast. I had the idea that everybody knew how to clean fish. But I was wrong.

On our trip in 1977 on the Snare River we caught a very nice Lake Trout. There were six of us. I looked around. There was only one fish cleaner here. And that was me. 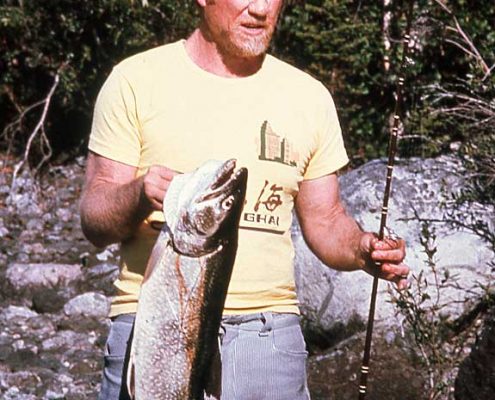 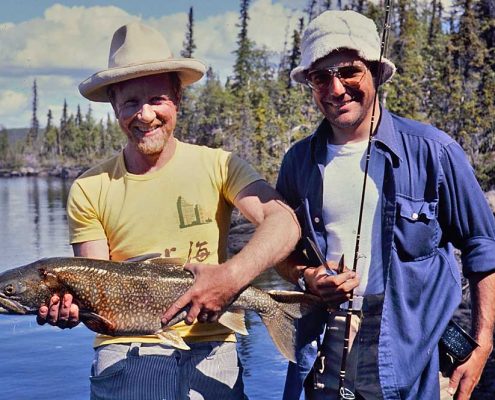 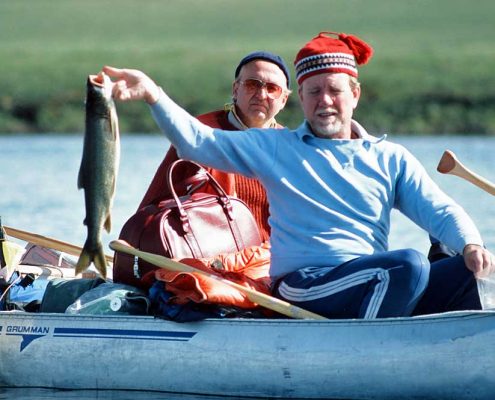 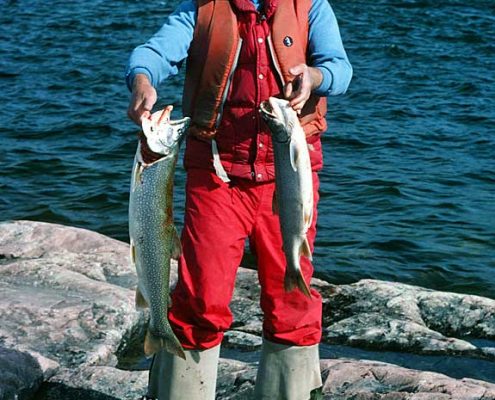 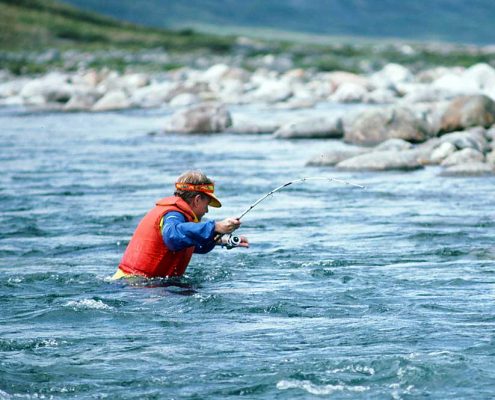 Well …… it was probably a seven or eight-pound trout and a big trout is easier to clean and it’s only one. I’d never thought that there were people who didn’t know about fish. I had to cook it as well. It fried up beautifully and we had a very tasty dinner. That made me the official fish person, which I didn’t want to be.

As I recall, that fish was what we used to call a salmon trout which is lake trout that fed on fresh water shrimp. The flesh was pink.

What I hated most on our trips was cleaning grayling which is very common in the Yukon and the western part of the NWT. They’re not very big and they have a lot of bones so you cannot make a mistake. One big fish you do it once. Six smaller fish and you do it six times. And to clean fish properly you really need a board and a razor sharp knife, neither of which I ever had. If I may say so, my finest moment was on Banks Island in snow flurry. Denis Harvey had caught a very nice Lake Trout. It was female full of eggs and I made everyone a fish egg omelette as well as pieces of lightly fried trout. The weather was awful and it warmed us up. The crew loved it. 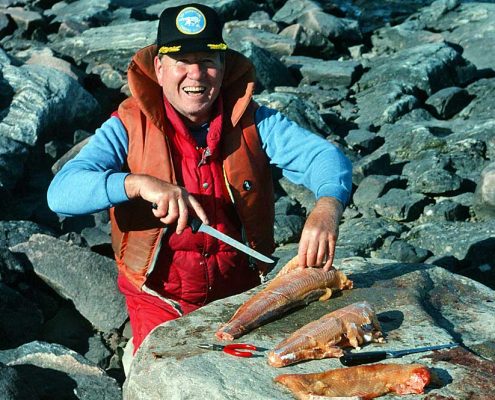 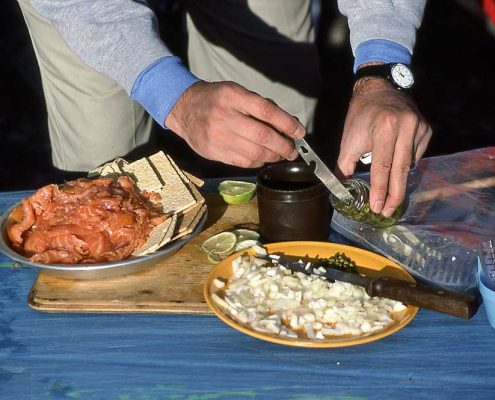 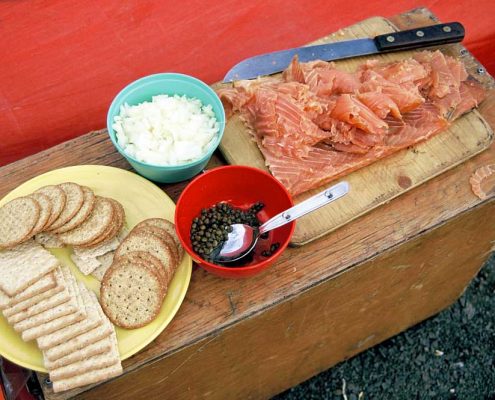 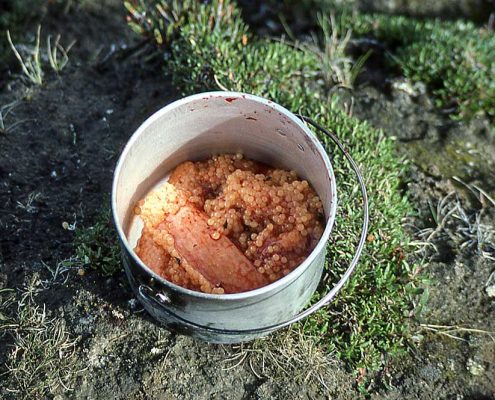 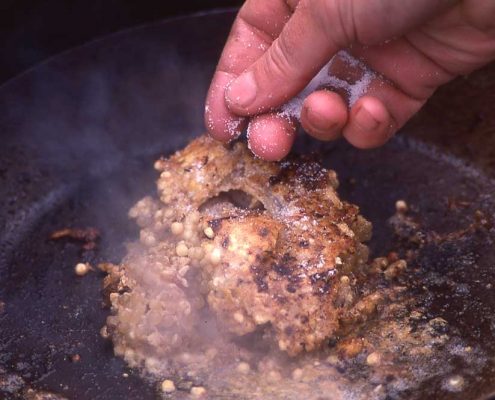 With fresh freshwater fish you can’t go wrong. The trick is to filet them. Never put them in the frying pan with the bones in. That really is amateur night. And do not fool around with fancy shmancy. Just salted butter in the frying pan. Many people never see a fresh fish. Take advantage of the freshness. 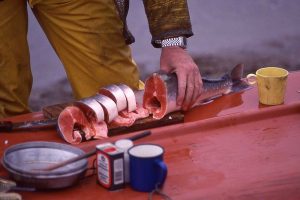 As we went further north and east we ran into some pretty nice char. Ten pounders. Char is easy because you don’t have to take the meat off the bone. By the way, there are no lake trout on the Arctic Islands. Only char.

And the Inuit clean it, cut it in pieces and pop it into a pail of salted boiling water. I cooked it that way for the group because I think it is delicious. Not everyone agreed with me. I learned that in Canada, at least in Ontario, people who really like fish were brought up in the bush, before electricity and refrigeration. In those days we had ice houses and as a boy, the fish that I caught in the evening, spent the night in sawdust on a block of ice, to be cleaned by yours truly in the morning. 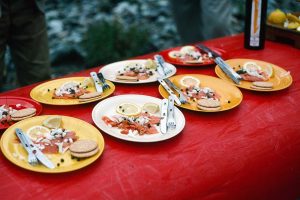 Char is a member of the salmon family and the traditional way to cook an Atlantic salmon is to poach it. It is inconvenient to carry a poacher on a canoe trip and salted boiling water in a tin can is a pretty good substitute. Anyway, for some reason that wasn’t very popular. In a big male fish, you sometimes get a nice length of milt which I threw in the buttered pan for breakfast. That was more popular.

We never did catch a pickerel in the Arctic. And pickerel is a wonderful fish to eat. But I guess that even in the Western Arctic, we were too far north.

Anyway, that’s how it’s supposed to be with fish. 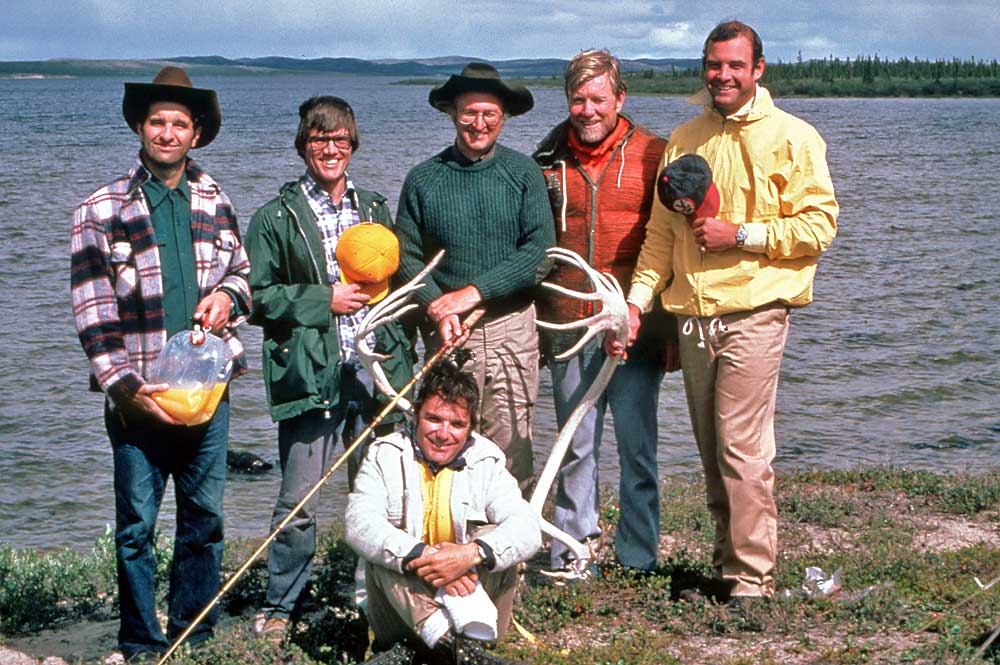