You are here: Home1 / Thomsen River2

Tackling the Thomsen by Tim Kotcheff 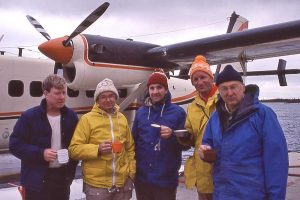 The twin otter taking us to the Thomsen River from Inuvik was due for a stopover at Sachs Harbour on Banks Island for refuelling. We loaded the plane and took off. But weather reports en route indicated a low ceiling and heavy fog at Sachs Harbour, forcing us to abort the flight and return to Inuvik. And, due to continuing adverse weather conditions, our departure from Inuvik was stalled for three days.

I was suffering from a pinched nerve in my neck that put me literally on the floor of the plane from Yellowknife. The pain was excruciating and thoughts of tackling the Thomsen in this condition filled me with dread. So the three day delay in Inuvik to recover was a godsend.

We slept at the Eskimo Inn but ate some of our meals and enjoyed happy hours beside our twin otter tied up at dockside. This involved removing wanigans, food bags and the stove every night, preparing dinner, cleaning up and then repacking the plane. Cumbersome to say the least. As we reconvened on a nightly basis to eat and drink (heavily), the locals must have wondered what the key stone cops were up to under the midnight sun. 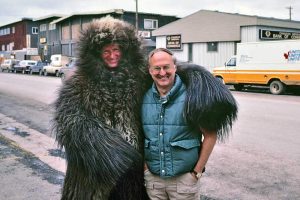 Killing time included some hi-jinx on the main street of Inuvik. John Godfrey rented a muskox coat from a local meat dealer and of course none of us could resist wearing it for a photo-op.

And yet another indignity – we were bounced out of the Eskimo Inn when rooms were no longer available and forced to find accommodations at a place called the Finto. The pilot joined us for a drink and was optimistic that the next day we would depart for Banks Island. 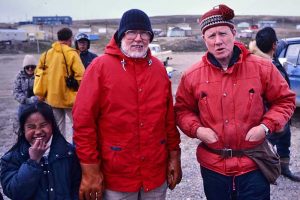 The weather was colder than usual we were told, 39 degrees F, but the wind chill made it seem incredibly worse. When we finally reached Sachs harbour we all ran to the local clothing store in our shorts and t-shirts to load up with the warmest clothing we could find including mittens, heavy coats, hip-waders and ear muffs. It was bonanza time for the store owner. And my…it…was…cold. More warnings from the locals – difficult conditions ahead, cold, wind, polar bears – prospects which seemed rather exciting and intimidating all at the same time.

Finally airborne, our plane floated northward towards the Thomsen flying low at an altitude of about 35 metres – a remarkable but extremely risky venture. Following the contours of the island – massive flocks of snow geese sailed just below and beside us in spectacular formations. On the ground – herds of muskoxen roamed freely along with the occasional caribou. What a sight! (Read Ted Johnson’s story about the Thomsen Muskoxen) 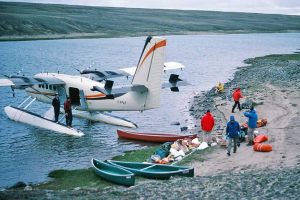 Arrival on the Thomsen

Initially, the pilot could not find the river. He was lost and had to fly eastward to the Prince of Wales strait to regain his bearings and then head west to spot the river. This was a bad start and as we finally neared our landing point on the Thomsen the usual apprehensions prevailed. The what-ifs. We lose another canoe. The gas stove conks out. We freeze to death. Sickness prevails. A polar bear attacks. The Arctic can be an unforgiving place and a mistake in the barrens can be fatal.

We believed we would be the first to descend the Thomsen – for us, the most northerly and adventurous trip ever undertaken.

The Thomsen runs north on Banks Island – a high Arctic Island that is about 800 kilometres north-east of Inuvik. Our put in point was a mere 1300 kilometres from the north pole. Anthropologist Vilhjalmur Stefansson explored the waterway in 1915 and named the river after Charles Thomsen, one of his crew members, who died near its mouth. 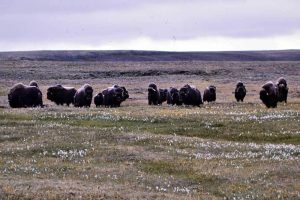 Banks is a virtual Arctic zoo with a rolling and rugged landscape. You can find gyrfalcons, peregrine falcons, Sandhill cranes, and rough-legged hawks. It’s home to the largest musk ox colony in the world – with the largest nesting population of snow geese in the western Arctic. The island is often described as “undulating”- no doubt because of rolling hills which give a false impression of the Scottish highlands. But these are barrens – cold and desolate – with little or no cover from the driving winds which were always a factor during our trip.

Right off the top we found what turned out to be the deepest part of the river on the first pass. There was just enough water to permit a landing and as it turned out the only pontoon landing site on the entire upper section of the Thomsen so luck was with us. A bad start suddenly turned out to be a good start. And as things progressed, we learned our worst fears were completely unfounded,

The weather was cold but bearable. There were no significant rapids, just a few patches of fast water breaking the river’s mostly peaceful flow to McClure Strait. The fishing – excellent. The scenery – spectacular. The wildlife – stunning. We ate well. Drank well. The camaraderie? Couldn’t be better. 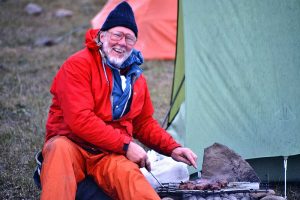 Early on Denis Harvey caught a huge lake trout which made for a delicious meal – including a milt starter prepared by the Senator. This would be Denis’ last trip with us because of health issues. He was a great paddling companion and was sadly missed on all our future explorations.

The last day of this extraordinary experience was spent at the confluence of the Thomsen and the Muskox river – the pre-arranged pick-up point for our return to Inuvik. There was a high rise about a mile or two from our camp site. We took the opportunity of climbing it and surprisingly, got a glimpse of Mercy Bay where Robert McClure and his ship the Investigator spent two brutal winters and a summer trapped in heavy ice. We would suffer no such misfortune. Having successfully completed our mission, we were heading safely home to the warm sunny south and our creature comforts. 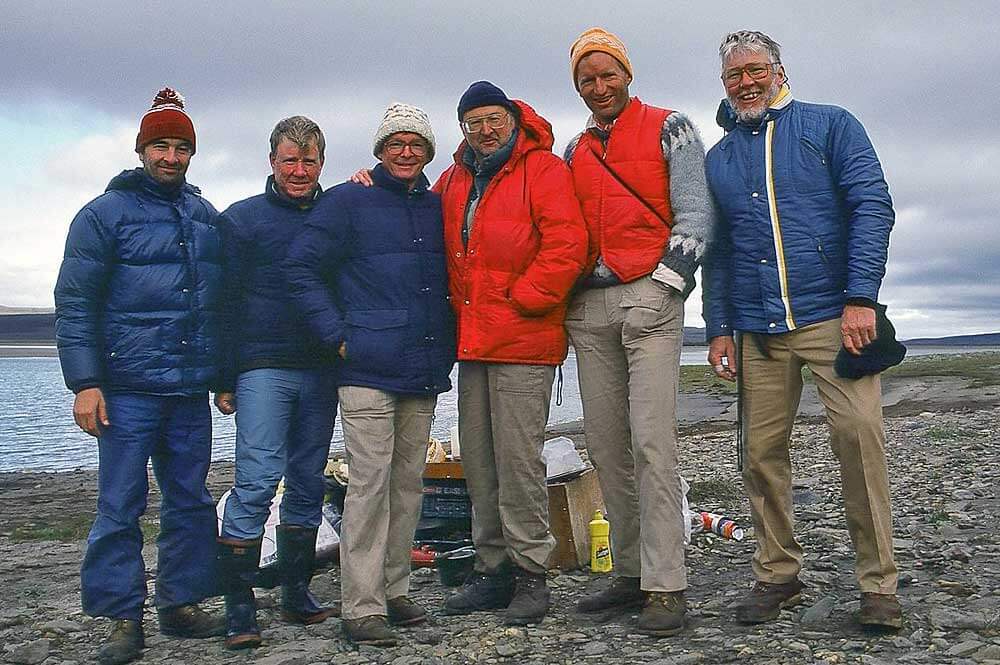