The Petawawa 1996 by Ted Johnson

By 1996 our lives had become busier and, for several of us, our wallets thinner as family obligations took priority. We were nonetheless determined to mount a trip, even if it were well south of the tree line and lasting only a long weekend.

And so it was on the Friday afternoon of the third weekend in July of 1996 that eight of us met near the Pembroke Gate to Algonquin Park for a weekend trip, keen on getting our “fix” of white water paddling and keen also to join together again for a trip with Pierre Trudeau.

The core group of Oliver, Kotcheff, Silcox, Godfrey, Stollery and myself were joined by Pierre and our friend, and master canoeist, Wally Schaber. Wally did the organizing and agreed to our request that he paddle in the stern of Pierre’s canoe. We thought that Pierre, now in his mid-seventies, might benefit from a little extra muscle and skill in the back of his boat. Pierre and Wally knew each other through their mutual pal Bill Mason, and we figured that Wally, with his quiet good nature and passion for the outdoors would fit in with all of us. 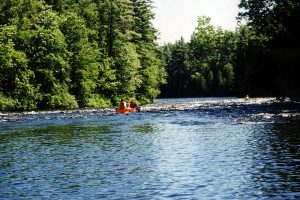 By late afternoon we were off, paddles clattering against gunnels, voices rising and falling with the exchange of banter among canoes. Camp was chosen above Big Thomson Rapids. Much time was spent finding flat tent sites – the importance of which had been learned over decades.

At Crooked Chute rapids, Pierre took an unscheduled dip. Perhaps we were a little too relaxed as we entered the rock garden that runs for a half kilometre before a sharp right turn into the deadly, thundering five-metre drop of Crooked Chute. Our four canoes worked their way slowly down the right bank on the steady current, sterns angled in toward shore to ensure an easy out if there were trouble, edging toward the last take-out spot on the right bank about seventy-five metres above the run into the chute. Pierre and Wally, in the lead, were almost at the take-out when disaster struck. 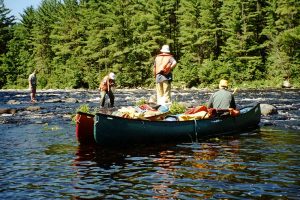 Picking up the pieces after Crooked Chute

It may have been an underwater rock, perhaps a tree branch jutting our from the shore – whatever it was, their canoe tipped over in a second and Pierre was suddenly instinctively swimming out into the stronger current to retrieve escaping paddles and gear. He seemed unaware of the proximity of danger. Craig and Tim offered assistance while the rest, further back, watched helplessly as Wally waded out to call to Pierre to get the hell back to shore before being dragged into the chute. Pierre took the advice but not before rescuing a paddle and small pack. An hour later we had all regrouped at the foot of the Crooked Chute portage, with most of the equipment and all of our canoes. Pierre and Wally endured the ritual chiding, the four boats set out into the eddy below the last ledge to retrieve a couple of packs that had survived the violent ride over the Chute, and we were on our way.

So when we came to The Rollway, portage was the only option. On that trek around the rapid we paused as a group to pay respect at the tasteful brass cross dedicated to Blair Fraser. 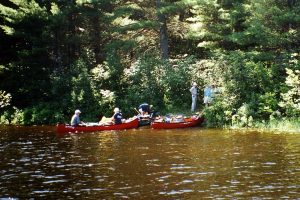 Top of the Rollway Portage

The law of conservation of effort was one of our fundamental tenets. On that score, the Petawawa should not have been chosen. The Crooked Chute portage is a struggle, and The Rollway portage involves a half-kilometre slog. That distance was multiplied many fold, given the load of “necessaries of life” that we tended to bring along. Upon arrival at a take-out spot, the well-honed practice among us was to grab the lightest of the communal packs and set off down the portage, leaving the heavier stuff for the hapless. Pierre had either forgotten this, or was appalled at the lack of conditioning of the rest of the crew. In any case, he tended to carry more than his share. At one point on the Rollway portage I encountered him carrying two good-sized packs. “Pierre,” I chided, “I’m going to have to ask you to lighten your load. You’re undermining the morale of the younger men on the expedition.”

The trip ended far too soon, at MacManus Lake, just before the river leaves Algonquin Park and enters the Petawawa firing range. As our canoes nosed up on the beach, we could not have known that this would be our last trip with Pierre.

My friends know I’m not objective when it comes to Pierre Trudeau, but one of the striking things we all observed about him was the way he always returned communal equipment or borrowed gear in pristine condition. When it was his turn to do the dishes, blackened pots came back looking like new. When I lent him a tent for the Petawawa trip it came back better folded than it had been in years. He left things better than he found them. I like to think the same applies to his time as a head of government.

Two years later came the tragic news of the loss of his son Michel. Pierre was never the same again and, within a couple of years, we lost him. As I reflect on our canoe trips together I am reminded of the touching ending to the fine tribute to Pierre written by Lysianne Gagnon in La Presse: “and now he is out there paddling the River Styx, searching for his lost son.” 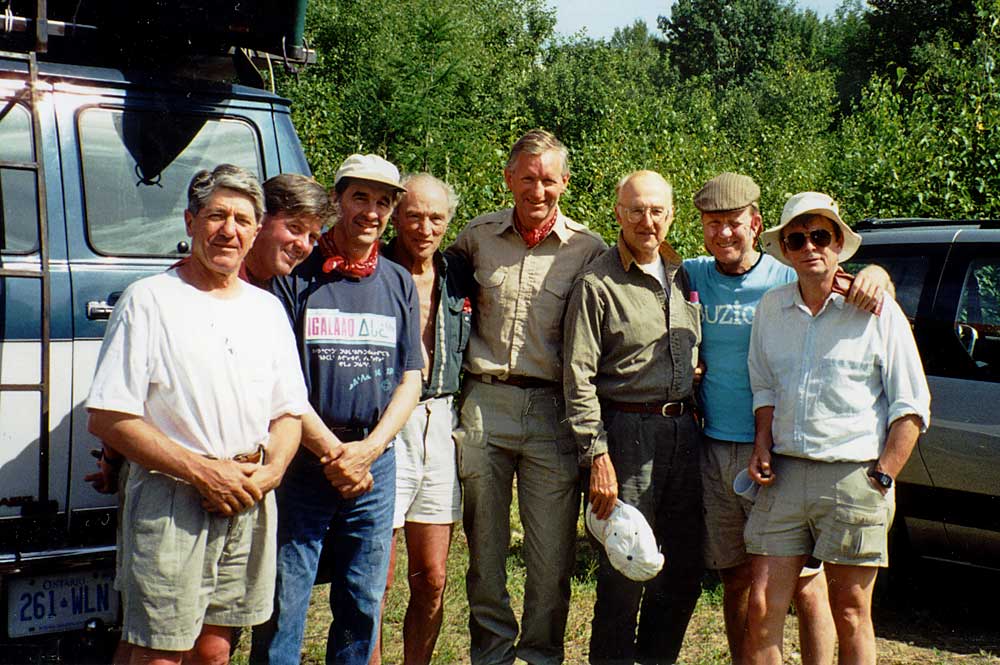 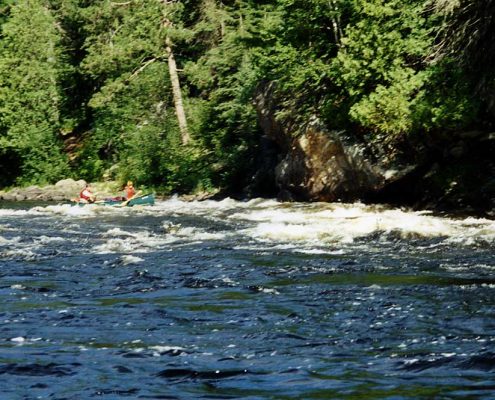 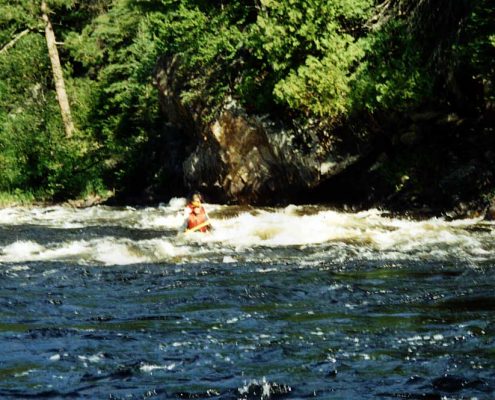 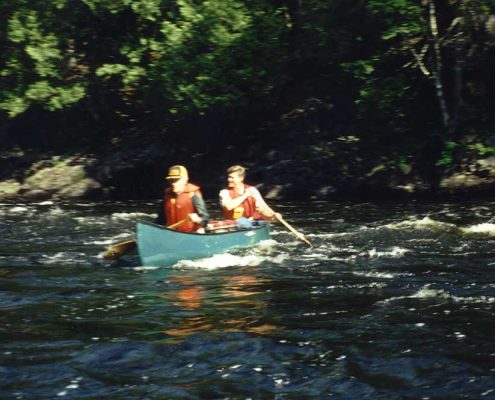 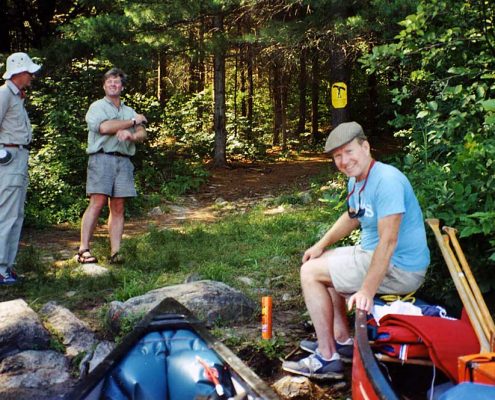 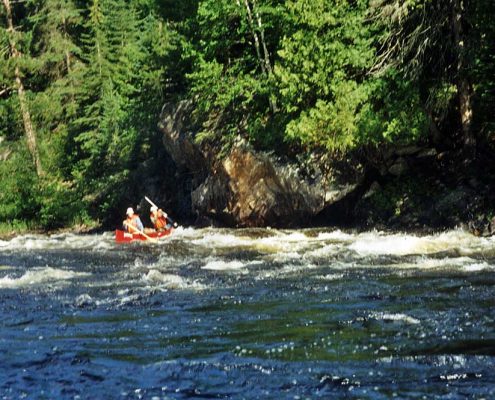 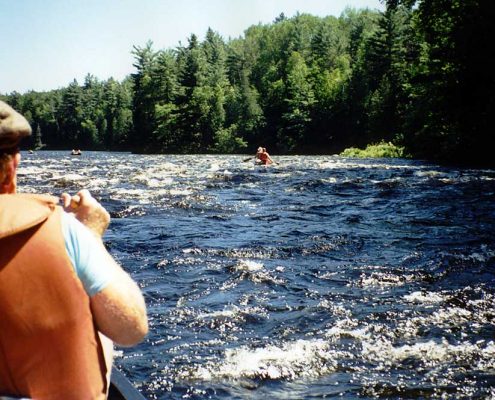 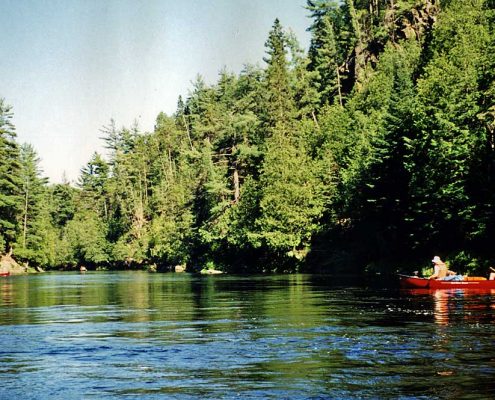 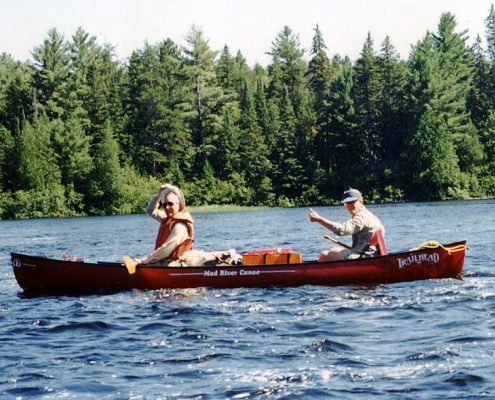 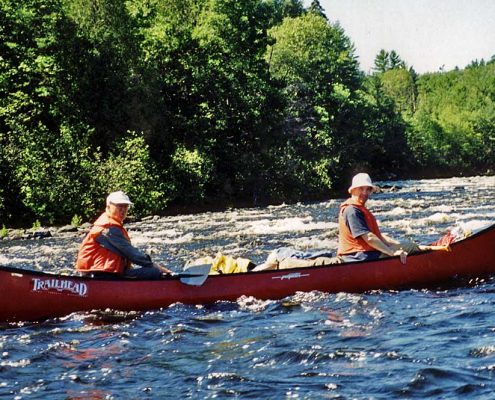 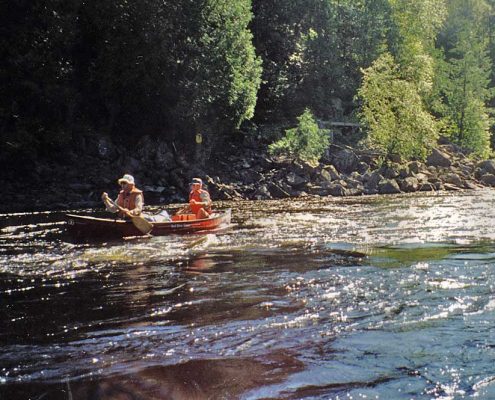 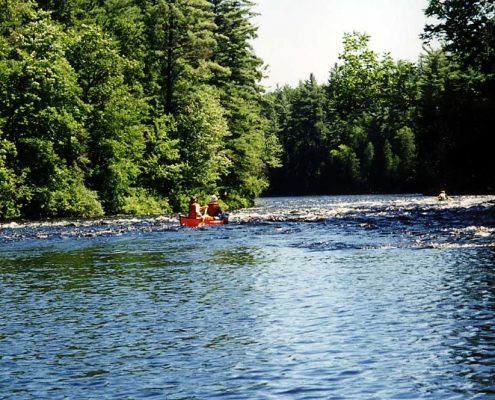 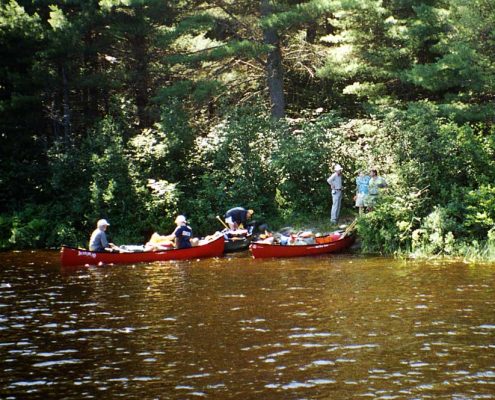 Friends ask, “What would Trudeau talk about?” The fact is, he listened more than he talked, though he’d join in, particularly when a topic was controversial. Inevitably we’d get on to politics and history.  MORE…..

The most dangerous set of rapids on our route between Lac Traverse and McManus Lake is Crooked Chute Rapids. There are three takeout options, each of which shortens the portage by a third. I was weighing the pros and cons of cutting the portage short as we passed the first take-out. Pierre was pleased with our combined skills as we manoeuvred past the second take-out, but both of us were wet before the final option.

We'd put the canoe into a back-ferry position with the stern hugging the shore when a submerged rock broadsided the downstream end. I grabbed the most important things - Pierre, his pack, and my canoe. Anything else not tied down went over the chute. Pierre was cool and looked after his wet load without a complaint, while I sprinted down the trail with an empty canoe to rescue our floating gear. Another party had the salvage operation well in hand by the time I paddled up to the flotsam. But the moccasin telegraph had already sent word downriver that Pierre Trudeau was upstream, so I was forced to admit to all that I had dumped Pierre Elliott Trudeau, and had to suffer the deserved guffaws.