You are here: Home1 / Ascetic

Trudeau on the Amazon

Exhaustion and Fulfilment: The Ascetic in a Canoe
1944 Essay by Pierre Elliot Trudeau

In 1941 twenty-two year old Pierre Trudeau teamed up with classmate Guy Viau to canoe from Montreal up the Ottawa River to James Bay – a 500 mile trip. Three years later he wrote this memorable essay about his relationship with nature and his passion for paddling in the Canadian Wilderness – which he describes as a place for personal renewal.

I would not know how to instill a taste for adventure in those who have not acquired it. (Anyway, who can ever prove the necessity for the gypsy life?) And yet there are people who suddenly tear themselves away from their comfortable existence and, using the energy’ of their bodies as an example to their brains, apply themselves to the discovery of unsuspected pleasures and places. I would like to point out to these people a type of labour from which they are certain to profit: an expedition by canoe.

I do not just mean “canoeing.” Not that I wish to disparage that pastime, which is worth more than many another. But, looked at closely, there is perhaps only a difference of money between the canoeists of Lafontaine Park and those who dare to cross a lake, make a portage, spend a night in a tent and return exhausted, always in the care of a fatherly guide – a brief interlude momentarily interrupting the normal course of digestion. 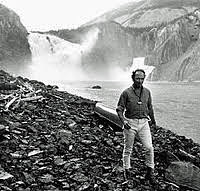 A canoeing expedition, which demands much more than that, is also much more rewarding. It involves a starting rather than a parting. Although it assumes the breaking of ties, its purpose is not to destroy the past, but to lay a foundation for the future. From now on, every living act will be built on this step, which will serve as a base long after the return of the expedition. and until the next one.

What is essential at the beginning is the resolve to reach the saturation point. Ideally, the trip should end only when the members are making no further progress within themselves. They should not be fooled, though, by a period of boredom, weariness or disgust; that is not the end, but the last obstacle before it. Let saturation be serene!

So you must paddle for days, or weeks, or perhaps months on end. My friends and I were obliged, on pain of death, to do more than a thousand miles by canoe, from Montreal to Hudson Bay. But let no one be deterred by a shortage of time. A more intense pace can compensate for a shorter trip.

What sets a canoeing expedition apart is that it purifies you more rapidly and inescapably than any other. Travel a thousand miles by train and you are a brute; pedal five hundred on a bicycle and you remain basically a bourgeois; paddle a hundred in a canoe and you are already a child of nature.

For it is a condition of such a trip that you entrust yourself, stripped of your worldly goods, to nature. Canoe and paddle, blanket and knife, salt pork and flour, fishing rod and rifle; that is about the extent of your wealth.

To remove all the useless material baggage from a man’s heritage is, at the same time, to free his mind from petty preoccupations, calculations and memories.

On the other hand, what fabulous and undeveloped mines are to be found in nature, friendship and oneself! The paddler has no choice but to draw everything from them. Later, forgetting that this habit was adopted under duress, he will be astonished to find so many resources within himself.

Nevertheless, he will have returned a more ardent believer from a time when religion, like everything else, became simple. The impossibility of scandal creates a new morality, and prayer becomes a friendly chiding of the divinity, who has again become part of our everyday affairs.

The canoe is also a school of friendship. You learn that your best friend is not a rifle, but someone who shares a night’s sleep with you after ten hours of paddling at the other end of a canoe.

Let’s say that you have to be towed up a rapid and it’s your turn to stay in the canoe and guide it. You watch your friend stumbling over logs, sliding on rocks, sticking in gumbo, tearing the skin on his legs and drinking water for which he does not thirst, yet never letting go of the rope; meanwhile, safely in the middle of the cataract, you spray your hauler with a stream of derision.

When this same man has also fed you exactly half his catch, and has made a double portage because of your injury, you can boast of having a friend for life, and one who knows you well. How does the trip affect your personality?

Allow me to make a fine distinction, and I would say that you return not so much a man who reasons more, but a more reasonable man. For, throughout this time, your mind has learned to exercise itself in the working conditions which nature intended. Its primordial role has been to sustain the body in the struggle against a powerful universe.

A good camper knows that it is more important to be ingenious than to be a genius. And conversely, the body, by demonstrating the true meaning of sensual pleasure, has been of service to the mind: You feel the beauty of animal pleasure when you draw a deep breath of rich morning air right through your body, which has been carried by the cold night, curled up like an unborn child.

How can you describe the feeling which wells up in the heart and stomach as the canoe finally rides up on the shore of the campsite after a long day of plunging your paddle into rain-swept waters?

Purely physical is the joy which the fire spreads through the palms of your hands and the soles of your feet while your chattering mouth belches the poisonous cold. The pleasurable torpor of such a moment is perhaps not too different from what the mystics of the East are seeking. At least it has allowed me to taste what one respected gentleman used to call the joys of hard living.

Make no mistake, these joys are exclusively physical. They have nothing to do with the satisfaction of the mind when it imposes unwelcome work on the body, a satisfaction, moreover, which is often mixed with pride, and which the body never fails to avenge.

During a very long and exhausting portage, I have sometimes felt my reason defeated, and shamefully fleeing, while my legs and shoulders carried bravely on. The mumbled verses which marked the rhythm of my steps at the beginning had become brutal grunts of “uh! uh! uh!”

There was nothing aesthetic in that animal search for the bright clearing which always marks the end of a portage.

I do not want you to think that the mind is subjected to a healthy discipline merely by worrying about simplistic problems. I only wish to remind you of that principle of logic which states that valid conclusions do not generally follow from false premises. Now, in a canoe, where these premises are based on nature in its original state (rather than on books, ideas and habits of uncertain value), the mind conforms to that higher wisdom which we call natural philosophy; later, that healthy methodology and acquired humility will be useful in confronting mystical and spiritual questions.

I know a man whose school could never teach him patriotism, but who acquired that virtue when he felt in his bones the vastness of his land, and the greatness of those who founded it.

In 1970, Pierre Trudeau, then Prime Minister, together with two aides and his ever-present RCMP security detail, landed by float plane above Virginia Falls. He carried his own gear and canoe over the ragged portage around the falls (anyone who has canoed the Nahanni in those days knows what a feat that was!) and paddled the length of the river to its junction with the Liard River at Nahanni Butte, over 150 kilometres downstream. The group camped for three nights without tents, sleeping under the stars.

Following his return to Ottawa, Mr. Trudeau orchestrated the creation of the Nahanni River Park Preserve to protect a very substantial stretch of the South Nahanni River and its watershed. This was and continues to be considered an important environmental initiative.

Back to Paddling with Pierre